The chart below consists of the current account balances of the United States, China, and emerging economies. The Current Account Balance of a country consists of three economic components: the trade balance, net factor income from abroad, and net transfer payments. The trade balance is defined as net exports minus net imports. Factor Income from abroad consists of payments received from factors of production (examples consist of interest on capital and rent on land) located abroad.  Net Transfer payments are defined as the total redistribution of wealth from one economy to another (an example is foreign aid). The largest component of the current account balance is the net trade balance. 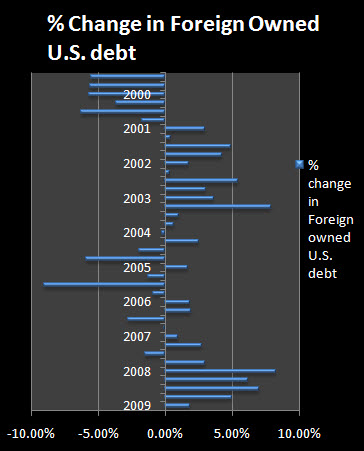 Over the last 30 years, the United States has seen its current account balance decline while China and other emerging economies have enjoyed a relatively bullish trend in their own respective economies (see chart to the right). This trend has global implications and may be part of the reason that emerging economies have been expanding so quickly. As the United States and other Western nations experience capital outflows emerging economies are seeing inflows of capital. The result is an increase in living standards, industrialization and foreign investment in emerging economies, and a simultaneous decrease of the same in industrialized nations.   The silver lining is that the outflow has been beneficial to domestic consumers by allowing for cheap imports and the resulting lower prices. Yet with China, the manipulation of the Yuan effectively destroys any normal economic relationship that would allow domestic consumers to really benefit in the long run. Both China and the United states are parts of a precarious situation.  China is dependent on American consumption and the United States is equally dependent on Chinese debt purchases.  Should the relationship continue, China will only purchase the debt up to the level where it believes it will be repaid. The United States on the other hand, has become reliant on China as a source of funding and will suffer large losses.  Up until now China has needed at least 8% growth to fend off riots in the mainland. The only country in the world that can satisfy the consumption needed for China to continue to produce at this increasing level is the United States. Even so, when the level is reached where China doubts the United States ability to fulfill its debt obligations, a breakdown in the relationship must occur.  The way the relationship works is outlined below.

As trade between China and the United States has grown, the government of China has done everything in its power to keep the value of Chinese goods and services low for consumers in the United States. It has achieved its end by manipulating its currency so as to keep the exchange rate artificially low. The way the normal economic relationship should work is when demand increases for a good in China, American companies purchasing those goods convert their American dollars into Chinese currency. This transaction results in a higher demand for the Chinese currency and as a result an increase in its value. If the normal relationship was allowed to occur, Chinese goods would gradually become expensive and American goods would start to become cheap to Chinese consumers.  However, in order to keep its goods cheap, China purchases American debt. This results in the conversion of the Chinese currency back into U.S. dollars, raising the demand for U.S. currency and resulting in an appreciation in the exchange rate between China and the United States. China, through this process, does not allow demand to determine the true prices of its goods.

Over the course of the last two decades, this relationship has remained intact. However, with American debt nearing thirteen trillion dollars, the relationship seems to be coming to an end. China is worried that the United States will not be able to fulfill its debt obligations and has begun to sell off U.S. Treasuries. What has effectively developed is a relationship where the United States plays the role of debtor and China assumes the position of creditor.  Both China and the United States will have to act from here on out, in a manner that reduces each countries respective codependence or both will find themselves in very dire straits.

Gold and Dollar React to ECB

This week, Gold in New York slipped below $1,135 an ounce falling from its highest price in six weeks, as the euro weakened against the dollar, which in turn, reduced demand for the metal as an alternative investment. This was after the European Central Bank reinforced the view that interest rates will stay at a record low of 1.0 percent in conjunction with some extended economic-stimulus measures, damping demand for the region’s assets.

Besides the fact that Gold rose 24.0 percent last year as the euro gained 2.5 percent against the U.S. currency, the trend has reversed now where the dollar rose as much as 0.8 percent against the euro after these announcements. As gold is a non-interest bearing asset, it tends to benefit from a low interest rate environment, which reduces the opportunity cost of holding the precious metal. Since there is a link on a day-to-day and weekly basis between gold and the dollar, as the euro dwindles, there tends to be mounting pressure on gold.

Additionally, oil slid towards $80 on Thursday as the stronger dollar pressured fuel prices from seven-week highs after news of another build in U.S. crude inventories. Thereupon, we see the aftereffects of it due to the fact that, gold tends to track crude prices since these metals can be bought as a hedge against oil-led inflation.

Consequently, it seems that the dollar is going to get stronger and stronger due to the mass realization that the European Central Bank (ECB) is cooked because of the lighter chances of the Greek problem being solved in the near future.

This week the Mortgage Bankers Association released its data on the Market Composite Index, which measures mortgage loan application volume in the U.S. Adjusted for seasonality, the weekly applications volume for last week increased 14.6% WoW (week-over-week), which can be seen in the chart below. This may sound like good news for the housing industry; however the details of the data show differently. 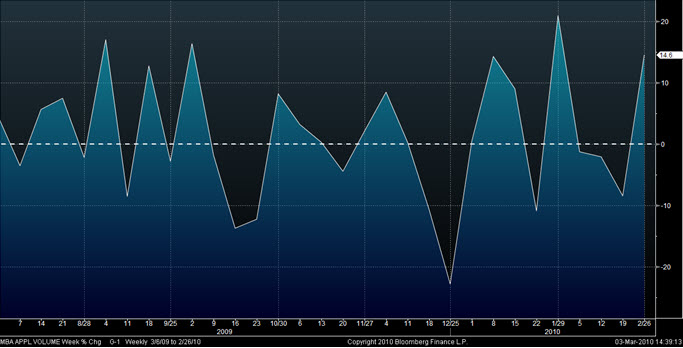 Although the Weekly Applications Survey increased by a respectable percentage, it must be noted that this number includes new purchases and refinances. For the week surveyed, refinances increased 17.2%, taking most of the weight for the overall increase we see in the headline, while new purchase mortgages increased a relatively modest 9%. Using a four week moving average (calculated by taking the sum of rate of change WoW, for four weeks and dividing by four) purchase mortgage applications are actually down 2.7%, while refinances are up 1.8%. This is a better indicator than simply looking at the weekly numbers, as it smoothes out spikes and outliers in data to give a more realistic depiction of mortgage applications. Analyzing this information, it can be noted that the only reason mortgage applications have been increasing this month has been almost solely due to refinancing. The reason behind the spike in refinances has been due to historically low mortgage rates, which decreased this week from 5.03% to 4.95% for 30 year fixed. Reiterating the conclusion that the increase in mortgage applications derived from refinances rather than increasing home sales, pending home sales data showed a decrease of 7.6% for January.

The increase of mortgage applications this week should not be taken as a bullish sign in the real estate market. Looking at other indicators of the overall economy, it can be noted that there still aren’t signs of a robust recovery and it is likely that the housing market will continue to lag the gains we have seen in the equity market.

On Monday, March 1, the U.S. Census Bureau of the Department of Commerce (USDC) published the January construction spending figures. The report showed that the seasonally adjusted figure was 0.6% below ($884.1 billion) the previous month’s figure (889.6 billion); down 9.3% from January 2009 ($974.3 billion).

Construction Spending is segmented into the private sector and the public sector, which were both reported 0.6% and 0.7% lower than the previous month, respectively. However, Residential Construction within the private sector was 1.3% above December, the first gain in three months. But this was offset by a 2.1% decline in Non-residential Construction. Additionally, Highway Construction from the public sector was reported 1.2% higher than the previous month figure, but also offset by the declines in the remaining accounts.

There has not been much improvement in housing. Two factors are impeding the growth of home building: foreclosures, which are estimated to reach record highs this year, and weak home sales. Actual figures of construction spending were in line with analyst estimates.