On Sunday, March 21, 2010, after nine months of healthcare reform debate, the U.S House of Representatives voted 219-212 in favor of the unprecedented $940 billion healthcare overhaul that will extend coverage to 32 million more Americans. Although stock futures pointed lower on Sunday night, the markets experienced a 20 minute decline on Monday morning. After declining slightly on Monday we saw an immediate reversal in the markets which not only regained the 20 minute loss but rebounded even higher. The Dow Jones Index gained 0.95% Monday, and approximately 1.6% this week. 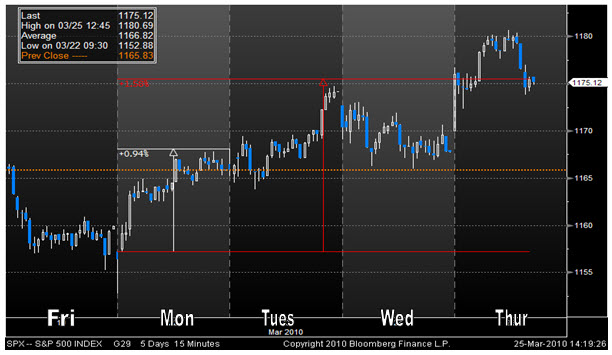 Device Makers: Fees for Boston Scientific and Medtronic will be delayed to 2013, rather than 2010. Increasing insured customers means an increasing demand for devices.

Health Information Technology: Subsidies for electronic medical records for physicians and hospitals will also prove beneficial for IT companies. Computerized medical records may prevent duplication and simplify the evaluation of patients.

Biologics: Congress is attempting to allow the FDA to approve generic versions of expensive biologics, such as Avastin, Genentech’s [DNA] cancer drug. This drug currently costs $50,000. The reform would certainly entertain lower prices.

Wealthy and semi-wealthy taxpayers: Individuals generating an income of $200,000 or $250,000 for families will see their disposable income decline.

Farm equipment maker Deere [DE] expects after-tax expenses to rise by $150 million this year as a result of the healthcare reform law. Caterpillar [CAT], construction machinery maker, stated Wednesday that it would take a $100 million after-tax charge to earnings in the first quarter because the new law will lower its tax deductions. However, these are estimations and are required by law to be incurred as a Many of the regulations on how this will affect big business haven’t been published yet but will be in the following days.

In other news, the reform legislation, which has passed through the House of Representatives, the Senate, and now the President, is being appealed by 13 states deeming it to be unconstitutional.

This week Best Buy beat analysts’ earnings for the fourth quarter with an EPS (earnings per share) of 1.82 versus 1.79. The financial update for the company’s Q4 came with a 12% increase in revenue, implying a stronger consumer than most have expected.   Same store sales rose 7% and the firm expects a fiscal year EPS of 3.45-3.60, ahead of analysts expectation of 3.37 EPS for the year. These bullish signals sent investors and traders flocking to the stock to spike shares up 7% in early trading Thursday.

The company notes that demand for notebook computers, mobile phones, and flat screen televisions were key products sold this quarter. Many see 3-D TV and other up-and-coming products in the pipeline as a further catalyst in the space, along with the obvious rise in demand for the industry. Along with this, Best Buy is focusing on its expansion in Europe, which although delayed, seems to be working in the company’s favor as property prices have depressed since they had planned on making their Europe arrival. Even with the surprise EPS and company’s bullish outlook, some analysts are still doubtful of the company’s aggressive expansion, wondering if there is sufficient demand to meet the new supply.

This week Citigroup shares rose on the report by Bloomberg News that the U.S. Treasury will soon sell its stake in Citigroup. The chatter, as the news came from unidentified sources, is that the Treasury will sell off the tax payers’ 27% stake in the company using a “preset trading plan”. The plan should be announced next month where the government will give its exact schedule and price that it will sell the shares. This method is said to protect them from being accused of insider trading, which although possibly curbed by this process, is still very possible. Overall, this can be seen as speculation and sale price is still unknown.

Other News – Schlumberger, Dubai, and the U.S. Stock Market Trend

Schlumberger (SLB) announced the acquisition of Geoservices, a French energy service firm, for 1.07 billion USD, adding to the hike in the energy sectors M&A action in 2010.

News in Dubai continues as the Emirate will provide 9.5 billion USD to Dubai World. These new funds were given without the assistance of its neighbor Emirate, Abu Dhabi. This tallies total funding in Dubai World to 20 billion USD, since the company initially announced it would delay its debt repayment. 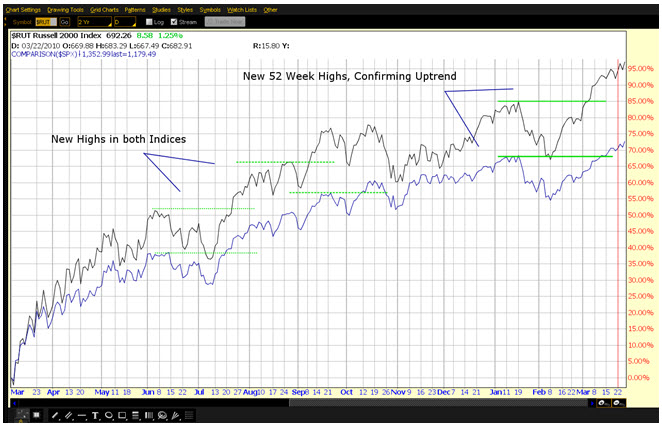 Overall the U.S. market has had a powerful week, rising almost 2% for the week on Thursday. Although many analysts believe the market is overbought, and multiples are not justified, others disagree. Many look to the economy, which although still struggling to recover, has shown resilience in dipping into another downturn. On the other side of the spectrum, technicians are beginning to feel more comfortable being invested in the U.S. market. Dow Theorists attempt to confirm long term trend signals in the market, examining two indices at a time for confirmation. When observing the S&P 500 (large cap U.S.) and the Russell 2000 (small cap U.S.), it can be seen that both indices have been in an uptrend for the past 52 weeks, making higher lows and higher highs in price levels. The two indices are studied as investors tend to buy or sell small cap stocks ahead of large cap.

Wednesday, the United States Treasury Department held a monthly auction of 5 year Treasury notes at a median yield of 2.605%. The bid to cover ratio, which reflects the demand for a particular security when auctioned, was 2.55 reflecting weaker demand than February’s 5 year note auction which had a bid to cover ratio of 2.75. Analysts speculate that the decrease in demand is due to investors moving capital into riskier assets, or a change in the overall riskiness of United States debt. Seeming to validate the former, the correlation between the Russell 2000 index price and 5 year Treasury yields turned positive beginning in January and has up until now remained positive. Even so, the latter also holds validity. Recently, Moody’s rating agency warned the United States that its debt levels were putting its debt at risk of downgrade. This fact alone could contribute to an increase in the perceived overall riskiness of U.S. debt and decrease demand. United States debt of comparable maturity, traded in the secondary market, has seen a rise in yields since the beginning of 2010.