The Escalation of Inflation in China

The Chinese Consumer Price Index (CPI), a chief measure of inflation, rose to a 16-month high in February, up to 2.7 percent from a year ago, which was 1.5 percent in January this year; beating forecasts of 2.3 percent. Additionally, the Producer Price Index (PPI), a major gauge of inflation at the wholesale level, rose 5.4 percent in February from a year earlier, up from January’s 4.3 percent. Inflation now exceeds the 2.25 percent interest rate on 12-month certificates of deposit, raising the risk for policymakers that savers might withdraw their cash from banks and plunge into the already bubbly property market. 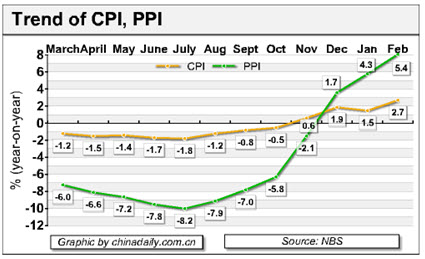 Nevertheless, the Chinese government has set a target limit of a 3-percent rise in consumer inflation for 2010 and has taken actions to ease inflationary pressures by ordering banks to increase their reserve ratios three times since December to curb their lending. It also aims to restrict this year’s credit growth to 7.5 trillion Yuan as inflation expectations rose after 2009’s new loans hit a record 9.59 trillion Yuan, almost double that of the previous year. Besides, the rise in consumer prices puts China’s real bank deposit rate in a negative territory, leading to speculations that the central bank will raise interest rates relatively soon.

Hence, direct credit controls would be necessary for China to get into a healthy, sustainable track, as traditional monetary policy tools do not work, given the low level of interest rates and an economic growth of 9-10 percent in China. On the contrary, the decision to slam the brakes on growth by means of a sharp reduction in lending must be accomplished in an appropriate manner, otherwise; it might drag down any and every company that soared higher during the recent China boom.

Recently the yearlong agriculture bidding war was brought back to the spotlight after lying dormant for some time. This week, CF Industries increased its offer to buyout Terra Industries; disrupting the current acquisition that was taking place. Having had plenty rumors and firm-to-firm aggression, this has not been the typical M&A transaction seen on Wall Street. Starting over a year ago, in February of 2009, the whole ordeal consist of four firms: Agrium – a Canadian integrated agribusiness firm, Yara – a large Norwegian agribusiness company, CF Industries – a fertilizer pure play, and Terra Industries – also a fertilizer firm.

To understand the recent news, the intentions of the preceding firms must be recognized. Terra Industries is the popular target, being bid on by both CF Industries and Yara. CF wants to merge the companies so it can grow as a fertilizer firm, becoming the biggest in the industry if the buyout occurs. Yara would use them to create integration in their value chain. The fourth company involved, Agrium, wants to buyout CF Industries for the same reasons Yara wants to buy Terra – integration.

So far Agrium has made attempts to buyout CF Industries, telling shareholders they will drop their bid if CF continues to bid on Terra. Agrium offered CF 5.5 billion USD, or 101 per share. CF quickly declined the offer and shows no interest in being bought out. CF then offered Terra 3.9 billion USD, or 47 per share – but they were soon outbid by Yara, who upped the offer to 4.1 billion USD, or 41.10 per share. On February 15th, this led Yara and Terra into a merger agreement at Yara’s bid price. The terms leave bidding open for about 30 days, with Terra taking the “superior proposal”. Sure enough, on March 5th, CF outbid Yara’s offer with a tender of 4.68 billion USD, or 47 per share. This gives Yara 5 business days to make a higher offer. CF Industries CEO said he believes that their offer beats Yara’s for a few reasons including strategic benefits such as swift and effective synergy, along with a faster transaction than Yara is offering.  Now sitting on the sidelines, Agrium believed they were the best fit for CF Industries. They have even extended their offer to buy CF until the end of March. Also now on the sidelines is Yara, who says they will “consider their options” moving forward on whether or not to up the offer for the 4th bid on Terra.

In an Opinion piece written in the Wall Street Journal in June of 2009, Arthur Laffer wrote:

“It’s difficult to estimate the magnitude of the inflationary and interest-rate consequences of the Fed’s actions because, frankly, we haven’t ever seen anything like this in the U.S. To date what’s happened is potentially far more inflationary than were the monetary policies of the 1970s.” 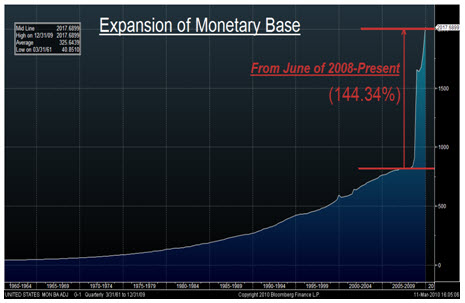 Laffer is most famously recognized for the Laffer curve, an economic model that describes the government revenue as a function of the tax rate charged. In his article he went on to make arguments about the deficit, level of debt and their respective effects on interest rates, taxes and potential  partial government defaults.  His argument is not without merit.  From June, 2008 to the present period the money base has increased by 144% and with the recent crises in Greece, Sovereign default is slowly nearing reality. Economists are now questioning the validity of Chairman Bernanke’s decision to keep interest rates at their target level of .25%.

Even so, the most troubling thought, should Laffer’s analysis hold true, is the tremendous inflationary pressure caused by this sudden increase in the monetary base.  Poor central banking practices have led countries like Argentina down paths that have cost inhabitants decades of potential economic growth.  Not surprisingly, high levels of inflation have also been shown to exhibit a very strong positive correlation with sovereign defaults and partial defaults.  In “This time is Different”, Kenneth S. Rogoff analyzes the root and frequency of Financial crises. His results show that the percentage of countries defaulting fluctuates in cycles of waves and troughs. He shows that these periods are fairly common and that they are repetitive.   We have been in a lull over the last 30 years, with the percentage of countries in default continuing downward.