Energy: Refineries Behind as Oil Prices Continue to Rise

Recently we covered the bullish breakout in crude oil prices and the opening of oil exploration by the current administration. Along with oil prices, we noted the overall energy sector bid and potential profits to be made in the area. Among the different industries in the sector – upstream E&P, midstream pipelines and transports, and downstream refineries – the refiners seem the worst off. Even in this bullish environment with high oil prices, increasing demand, and an optimistic near term, refiners seem left behind. What appears to be occurring is that they are getting squeezed out in the form of operating margins, which can be seen when analyzing the crack spread. The crack spread is simply crude oil prices minus gasoline and heating oil prices. For refiners, this is the typical input and output. The “crack spread” is the dollar amount they receive after buying crude and turning it into a usable product such as gasoline or heating oil. 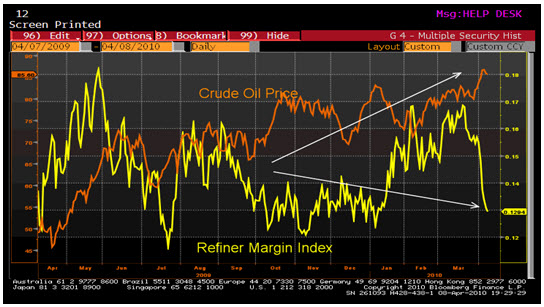 At first glance everything seems up to par: crude oil is rising, gasoline is rising, and spreads are getting wider. However the fact of the matter is that gasoline isn’t rising fast enough for refiners to make a better profit; in fact it has been getting worse. To see this relationship we plotted the refiner margins as an index (AQAJ0 COMDTY/CL1 COMDTY) against crude oil prices (see chart). It can be observed that there has been a historically wide spread between oil prices and margins. This means while the rest of the sector is enjoying higher profits, refiners are actually feeling much worse. While historically refiners have had an average (5 year) of about 17%, for the year they have been averaging closer to 12% while oil prices have surged 71% over 52 weeks and around 8% YTD.

The crack spread dynamic directly affects the refinery business and has been noticed across the industry. As noted by Gary White “Royal Dutch Shell has unveiled the most dramatic overhaul…to exit more than a third of its 90 retail markets, slash refining capacity and return to growth after seven years of falling output.” To solve this issue, refiners need one of two things to occur – higher gasoline prices or lower crude oil prices. With the latter seeming difficult to occur, prices at the pump could be on the way to much higher levels.

Shoppers opened up their wallets wide during March, purchasing items besides the basics while simultaneously paying full price. Compared to last year’s figures, when recession-struck consumers were only willing to buy the basics, and only on sale, U.S. March retail sales came in strong and higher than expected on Thursday, April 8. Sales from stores open at least one year rose 9.1% last month and 11.4% for total sales, the best figures since the index had been created a decade ago.

Same store sales are considered one of the beast measures of performance regarding the retail sales because they do not include the impact of store openings and closings in the past year. The report is based on 31 retailers. The results hit double-digits at some chains, such as midlevel department store Kohl’s Corp. (KSS). Sales at Kohl stores which had been open at least a year spiked 22.5%, 16.8% in the high-end luxury department store Nordstrom (JWN), and 19% in the apparel store Aeropostale, to name a few.

As stated by Gregg Steinhafel, Target’s CEO “We are celebrating strength of the first quarter, but we are not taking anything for granted. I think the rest of the year’s sales will have ups and downs, but the general trend line will be up.” Target’s sales jumped 10.3% in March, with sales in clothes rising even higher, giving evidence that shoppers are no longer only buying basic goods. Last year, Target saw its sales fall 6.6%. The economy still shows fundamental signs of weakness and retailers are still far from fueling their businesses with additional workers and invested capital. Although shoppers are in a more upbeat mood, they remain cautious in the light of high unemployment. Furthermore, the effects of the new healthcare policies on disposable income are still unclear and may prove to sprout bumps in the upcoming roads.

UAL Corp’s United Airlines is in merger talks with US Airways. The two are in the midst of a deal that would benefit the entire industry, allowing it to cope with overcrowded skies.

US Airways shares surged 26 percent to $8.61 after the closing bell. United’s stock jumped more than 8 percent to $20.51. The talk of the deal also boosted other airlines premarket, with Delta gaining 2.3%. Continental Airlines Inc., which has also been talked about as a possible partner for United, climbed 3.2% in before-market action, while AMR Corp., parent of American Airlines, rose 3.5%. Additionally, discount carriers also rose, with JetBlue Airways Corp. gaining 4.7%, Southwest Airlines up 0.8%, and AirTran Holdings Inc., up 1.2%.

This would not be the first time the two airlines have tried to merge: in 2000, they announced a $4.3 billion deal that fell apart on opposition from labor unions and the Department of Justice. Furthermore, in 2008, US Airways was in parallel talks with United and Continental Airlines Inc about a possible merger, when Delta Air Lines was merging with Northwest to create the world’s largest airline.

The airline industry has lost $50 billion in the past 10 years, including $11 billion in 2009, according to the International Air Transport Association. The industry has been struggling with high fuel prices and a pullback in consumer spending amid a weak economy.

Hence, this move is considered good for the rest of the industry. As both companies have previously argued, it would allow for consolidation in an industry struggling with too many carriers flying too many flights and battling with thin margins. Along these lines, many airline executives have called for consolidation, saying it is a necessity for the industry to return to profitability.

Thus, even though a deal between US Airways and United would create one of the world’s largest airlines, there will be an air of  ambiguity regarding the synergies required in the deal since it would lack support from the pilots union, a major force that has derailed mergers in the past. Simultaneously, antitrust issues will also likely come up again with the two carriers ending up with a large number of hubs and extensive operations in the Washington area. 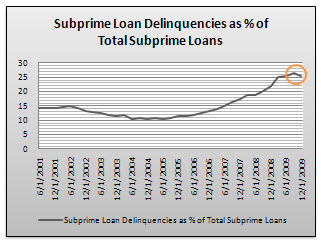 The “Mortgage Bankers Association of U.S Mortgage Market Index” saw a drop in Mortgage loan applications for purchases and refinances. Bob Willis, a Bloomberg columnist, attributed the drop to “the biggest jump in mortgage rates since June” and explained that the drop in the index reflected a significant slumped demand for refinancing more so than a slumped demand for purchases as rates begin to rise.  The purchase gauge rose only .2% whereas the refinancing gauge dropped 16.9% (both gauges are components of the index). The refinance gauge however, has declined 5 consecutive weeks in a row.  Analysts now wonder whether or not the slump in demand for refinancing may be foreshadowing an increase in demand for housing purchases. In the same 5 consecutive weeks, the influx of mortgage applications for purchases has varied. It has decreased once and increased the rest of the time. Although a rise of .2% is much less than the 6.8% rise in the previous period, it seems that the MBA market index may be leading other economic indicators. Such as, the total number of completed contracts for existing one family home which has been in decline.  Demand for both existing and new home purchases has been weak entering into 2010. The real estate market is still substantially depressed as demonstrated by S&P/Case-Shiller home price index. The index has seen netted a 30% decrease in the price of homes since 2007 (index takes measurements from 20 metropolitan areas in the United States). Analyst fear that if rates rise too quickly, demand will dry up

and home prices will decline further. Along with mortgage rate fears are also worries about the upcoming termination of the government’s first home owner’s tax credit (which credits first time homeowners 8000 after the purchase of a first home). The program is expected to end at the end of 2010. Even so, subprime and prime delinquencies on residential real estate have begun to slow; a positive sign that the residential real estate market may already have bottomed out.