Their unprecedented winning streak was about to end. After 77 wins, the most by any women’s college basketball team, the women of the University of Connecticut Huskies walked off the court with a 20-12 deficit against Stanford at half time. It seemed clear the Huskies had lost their mojo.

How would your organization respond to such a situation? After years and year of continual growth, beating the market and the competition every quarter, you find yourself faced with a quarter that closes with an inevitable and stunning loss. What would your corporate DNA lead people to talk about around the water cooler? Would they come to accept the inevitable end of the company’s supremacy or would they swing into action to save it?

The answer, unfortunately, is already programmed for us by the stories we heard as children and now tell as adults. These stories, at least in the West, lead us to view time as linear. We believe the past directs the future. We believe in linear cause and effect. We believe the moment will persist. If a ship leaves the dock and we miss it, then it is gone.

But an alternative view is worth considering. In the East, a fundamentally different concept prevails. This cyclical view of change argues that the wind will shift, the rudder will turn, and our ship will return to us even if this means that the ship circumnavigates the globe before it comes back.

Over the past two months I’ve interviewed around 10 CEOs, many entrepreneurs, and have noticed a common theme emerging: it is helpful, particularly in these trying times, to take a cyclical view of change rather than a linear one.

The CEO of Blink suggested that while a venture capitalist says “no” 99 times and “yes” just once, the entrepreneur learns to hear “no” 99 times persisting to hear the “yes.” In our interview a couple of weeks ago with Bud Paxson, founder of the Home Shopping Network, Bud emphasized that while he is remembered for his successes, he has actually started about 40 businesses, most of which have failed.

I think that such entrepreneurs must have a brain with mismatched wires. While most of us pull our hands out of the fire, while we retreat from negative feedback, these people actually see the downside and the beginning of an upside. They are like athletes who use pain as a guide. The pain shows them they are stretching themselves.

The Huskies are also wired in reverse. They took the devastating half-time score and instead of living in a story of defeat, they chose a story of renewal. They acted as a pendulum rather than a falling rock. They missed 18 of their first 20 shots in the first half, the lowest first-half scoring total in their history. But they came back to dominate in the second, digging themselves out of inevitable defeat to win and protect their undefeated title. 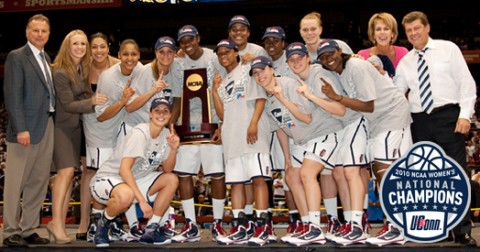 The answer, I believe, is to pay careful attention to the stories we tell because our people will fulfill the stories they are told. Ask yourself the questions below to see how you can respond to adversity like the Huskies.

Kaihan Krippendorf (www.kaihan.net), a founding Fellow of the Center for Leadership and an adjunct professor in the College of Business Administration at Florida International University (FIU), is the author of Hide a Dagger Behind a Smile and The Way of Innovation. This article was originally written as an entry for his FastCompany.com blog “The Outthinker: Mavericks that Out Innovate the Competition.” The opinions expressed in this column are the writer’s and do not necessarily reflect the views or opinions of either FIU or the College of Business Administration.