This Monday we saw the EU, along with the IMF release a near trillion dollar rescue plan of the EU region.  After the sharp and historical selloff the markets witnessed last week, Monday opened much higher (close to a 4% gap in most indices) on the news of the finalized bailout plan. However, as of Thursday, equity markets across the globe have become stuck in a range, failing to continue Monday’s rally. This can be seen in the chart below, which includes the European, U.S., Japanese, and UK markets performance for the week. Although equity prices in the U.S. (using S&P 500 as a benchmark) have retreated towards levels before the intraday crash last Thursday, many are beginning to wonder if the market can go much higher without the expected continued reaction of the EU bailout.

While the markets have at least been stabilized for the week thus far, currencies are telling a much different story as the EUR/USD pair lost over 4.3% in a matter of days (this is a dramatic move in the currency market). In line with the equity markets, the EUR/USD pair rose Sunday night and Monday morning, however fell into steep decline for the rest of the week. This price action translates into investors/traders/banks moving their funds from the Euro currency to the U.S. In an another fashion, they don’t trust the currency, or they believe (as speculators) it is overvalued and therefore must be sold.

Commenting on the EU bailout were economic research analysts Edward Harrison and Brian Milner. They believe the bailout is being given to the banks simply to “roll over debt”, which is “not going to fix things”. Along with other economist, this bailout is being named an “attack on the speculators”, however it cannot change the value of the assets if they are intrinsically worth less based on the current fundamental environment. They believe this is only the beginning of a long and severe downturn, which is causing many investors to revalue the EU currency.

Over the course of the last week there have been a few notable economic releases. The unemployment rate rose from 9.7%, .2 percentage points to 9.9%. The Trade deficit widened and finally the Budget deficit for the month of April grew more than anticipated.

The unemployment rate rose unexpectedly on Friday, May 7, 2010 to 9.9%. An encouraging increase in the non-farm payrolls (from 162k to 290k) suggests that the increase in unemployment was the result of discouraged workers reentering the workforce and actively searching for work.  The employment statistic serves as a lagging indicator and may get worse before we see substantial signs of recovery. The data seems to suggest that the employment condition improved rather than worsened as payrolls rose and people began to reenter the workforce.

The trade deficit for the month of April widened as Import growth outpaced export growth.  The growth seems to suggest an increase in discretionary income and consumption from the American consumer.  This indicator underscored signs of recovery as both imports and exports grew.

The Monthly Budget Deficit for April

The federal deficit for April was considerably larger than expected. Government expenditures far outweighed tax receipts. The previous deficit was 20.9 billion for the month of March while the month of April reported a federal deficit of 82.7 billion. The largest of the government expenditures consisted of Medicare, National Defense spending, Income Security spending and Social Security expenses. 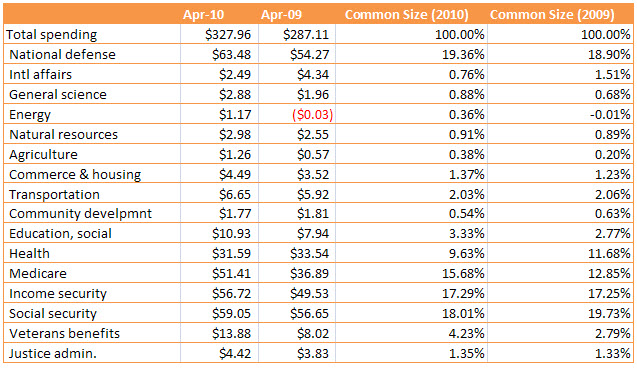 These economic indicators seem to give a mixed picture of economic reality.  They seem to indicate that the employment condition is getting better and economic activity is picking up again. However, the amount of government spending seems to suggest some troubling signs.  First the government expenditure account named Income Security, which consists of welfare payments, unemployment insurance and federal pensions for retired workers seems to be preventing a strong recovery in the labor market. Unemployment Insurance has been extended twice and is stripping away the incentive to find work.  Secondly large deficits with high debt levels are a mixture for disaster. It’s the same mixture that Greece uses and which has burdened the European Union.  While the employment number is encouraging as is the trade number, a strong and sustainable recovery will not be possible unless the Federal Government takes steps to reduce its debt levels.

Last week, Gold hit a record high at around $1220 per ounce. This occurred simultaneously with the Euro Zone’s $1 trillion bailout along with the huge deficit present in the U.S. which left gold as the only reserve choice of currency.

It seems that the central banks of the world have no other choice now than to own gold. Fears that the past weekend’s $1 trillion European rescue package will ultimately drive inflation resulted in investors piling back into gold. The basic fundamental reason for owning gold is due to the fact that it acts as a tool for diversification for central banks and investors worldwide, especially in times when the Euro is hurt.

As Dennis Gartman of The Gartman Letter mentioned, “The ECB’s purchase of government debt as part spdprocess shall tend on balance to put upward, perhaps relentless, pressure upon gold as gold becomes every day to be seen as the second reservable currency, supplanting the EUR which had assumed that rule until quite recently.” 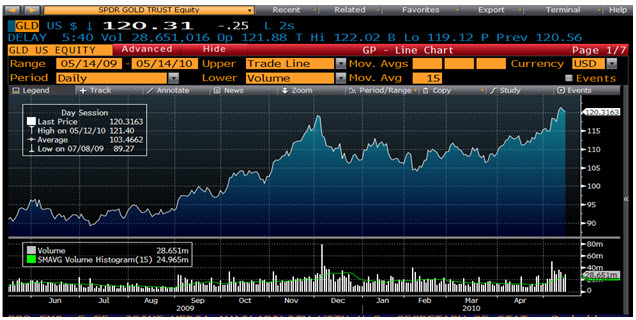 One of the main ETF’s of gold, namely the SPDR Gold Trust, is up 14 percent from its 2010 low in February. The long term for gold trend looks bullish, based on the fact that central banks will not raise rates, since it would be politically inefficient to raise rates raising fears over inflation. Hence, it seems that in the upcoming months for instability and growing uncertainty, gold would be a better hedge option against inflation than traditional inflation hedges like the money markets and property. However, in spite of all this, even though gold prices may go higher, there ultimately will be a fall and investors should have the needs to protect themselves in this age of growing unpredictability.