This week (as of Thursday (5/20/10)) the U.S. large cap stock index fell almost 6% on what many are calling “Continued Euro Worries”. There, could be a number of issues ranging from technical levels to global economic issues, politics, or simply over priced equities that could explain the recent market “correction”. The fact that so many possibilities exist, give investors and traders alike a reason to sell and very few reasons to buy with conviction.  If they are looking towards the near term and appreciate decent risk-to-reward scenario, then they may not be accepting the current market environment. Looking at earnings this week, most major corporations either beat earnings expectations or were in line with what analysts expected for the quarter. Even so, the price action of these companies show that only one of the stocks ended positive as of Thursday (as can be seen below  BJ’s Wholesale Club was the only stock up about 1%.). All other companies were sold off on better than expected earnings, which can be interpreted as a bearish sign for investors. Although the EUR/USD did begin to stabilize on Thursday, the U.S. market continued to fall to 1071.59, or a loss of 3.90% for the day, nearing the lows that haven’t been seen since the “flash crash” on May 6th. 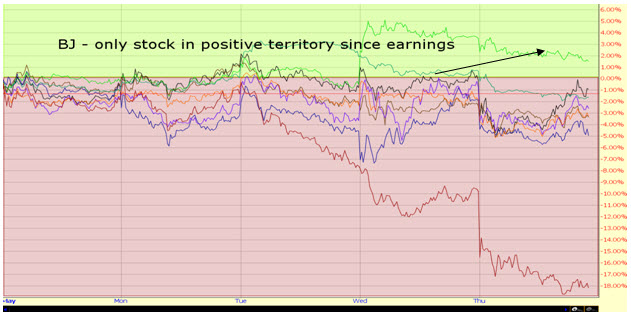 The Consumer Price Index saw a small decline of .1 percent for the month of April.  Over the course of the last two years the CPI has remained relatively stable amid growing concerns of inflation. The Consumer Price Index is viewed as the primary measure of inflation. It is defined by the Bureau of Labor Statistics as “a measure of the average change over time in the prices paid by urban consumer for a market basket of consumer goods and services” (volatile food and energy prices are excluded).  Over the last 60 years we have seen, for the most part, a steady increase in the dollar amount needed to purchase a basket of goods and services. Since the financial crisis, there have been significant fears of hyperinflation based on the rapid expansion of the money supply and on the level of national debt. Therefore, it seems of importance to explain the benefit of moderate inflation and the impact that monetary policies have on the level of inflation.

The question of what causes in inflation is still at the center of large debates. However, most economists agree that the quantity theory of money (which says that the velocity of money times the quantity is equal to the price level times total economic activity [M*V = P*Q]) is relatively accurate. The quantity theory of money implies that there are three major variables that can affect the price level: money supply, the velocity of money, and the level of economic activity.

In our current market is it rational to believe that inflation will increase in the future? It is reasonable to believe so. At the end of 2008, economic activity (Q) substantially decreased; this had the effect of lowering the right side of the equation. In order to prevent strong deflationary pressure in the short run, the Federal Reserve began implementing a stimulative policy and expanded the money supply (M). This policy increased the left side of the equation and prevented prices from dropping.  However, rates have continued at low and unprecedented levels while economic activity on the other side has begun to increase. This should have inflationary implications.   A moderate level of inflation is healthy because it may imply that consumption is increasing or that economic activity is rising. This is not the case. The Federal Reserve’s plan seems to be to increase the money supply and thereby stimulate the economy until economic activity becomes strong again. At this point they will need to decrease the money supply rapidly so that hyperinflation does not ensue.  Balancing this equation may prove more difficult than the Federal Reserve expects.

Last week, the number of loans and mortgage applications in the U.S. dropped considerably, to the point of a 13-year low, depressed by the extensive reduction in purchases since 1997, along with the fact that  the expiration of the homebuyers’ federal tax credits drove them further away. However, there has been an increment in refinancing, with the near-record slumping mortgage rates.

As seen beside, the Mortgage bankers Association’s applications index fell by 1.5 percent, on a seasonally adjusted basis, in the past week ending on May 14. However, even though the U.S. housing industry seems to be improving, it would require more consumer confidence and future employment gains in order to see a more sustained equilibrium.

Moreover, there was a drop in the group’s purchase gauge by 27 percent as seen here. This steep drop was preceded by a decline of 9.5 percent in the previous week, focusing on how the expiration of the tax credits on April 30, 2010 worth up to $8,000 would impact the housing market in the forthcoming months unless a rebound in employment rate occurs.

However, we see that the group’s refinancing measure rose 15 percent in the past week. This is because of the fact that the number of applicants looking to refinance their loans climbed from 57.7 percent in the prior week to 68.1 percent as borrowing costs dropped considerably. Average 30- year mortgage rates fell to 4.83 percent from 4.96 percent, thus being the lowest level since November 2009.

Hence, although the worst of the housing crisis is over, recovery will be delayed and gradual. As mentioned in Reuters, “Low borrowing costs and stabilizing home prices are being offset by near double-digit U.S. unemployment and a looming supply of foreclosed properties yet to hit the market. Furthermore, with the tax credits gone, home shoppers will take more time to find the right property.”