As of Thursday, July 01, the Dow Jones Industrial Average has lost just about 3.94% for the week thus far. Since the index’s current annual high of 11204.28, it has dropped about 13.23%. The S&P 500 has had similar losses of -4.35% for the week-to-date, and -15.61% since its current annual highs. These losses have come after a strong rally since March of 2009, riding on the catalyst of “free money” being poured into the economic system by the Federal Reserve and a possible light at the end of the tunnel. The market seems to have lost its strength. After over 18 months of keeping rates at near zero, investors wonder how much longer this “free money” environment can continue. This, coupled with a rising U.S. deficit, negative economic indicators across the board, and a fragile European economy, makes it hard to see that “light” investors were betting on in 2009.

Along with the major indices, commodity prices seem to have taken a similar path for the week. The SP GSCI (Goldman Sachs Commodity Index), which consists of a basket of commodities, has lost 5.34% week-to-date.  Crude oil has taken a significant -8.4% loss for the week thus far, after rallying last week on the news of developing weather storms.

Behind worries of the future economy, and possibly end of the quarter window dressing being done by money managers, Treasuries were just about the only asset class to rally this week. As of Thursday, July 01, the ten year maturity U.S. bond currently yields 2.95%, its first time being under 3% in months. The Barclays 20+ Bond ETF posted gains over 2.63% for the week.

“…Tracks the number of home re-sales under contract. The majority of pending home sales become existing home sales one or two months later and therefore, this index can be used to predict actual home sales activity.”

Analyst expectations averaged around 14.2% but even the lowest estimate was below the actual figure. The number is being largely attributed, by the media, to the ending of the new buyer’s home credit which expired in May.  However, Congress has passed legislation to extend the tax credit for delayed contracts.

It seems as if there is a concerted effort by the government and some banks to artificially create demand and restrict supply. In order to keep the housing market stable in the near term, consumers are being allowed to stay in their houses – even if they are not paying their mortgage. The banks would rather not take the houses as collateral. This is largely due to the fact that home prices have devalued substantially and also because doing so would inject new supply into the market. Home prices would decrease further and the losses would lock themselves in. Conversely, the congress created the tax credit to artificially inflate demand. It is an election year and stable housing prices are the key to pushing the notion that the United States is recovering.

Commercial Real Estate, on the other hand, is not being covered by the media but deserves attention. In February of this year, I put up a graph of commercial real estate delinquencies occurring in the United States of America. In subsequent months, new data has been released and the trend has continued to reinforce itself. Ninety day delinquencies and outright foreclosures of commercial real estate properties have continued to increase well into Quarter 2 of 2010. The real estate market is continuing to show signs of weakness because policy makers are preventing the market from clearing itself. 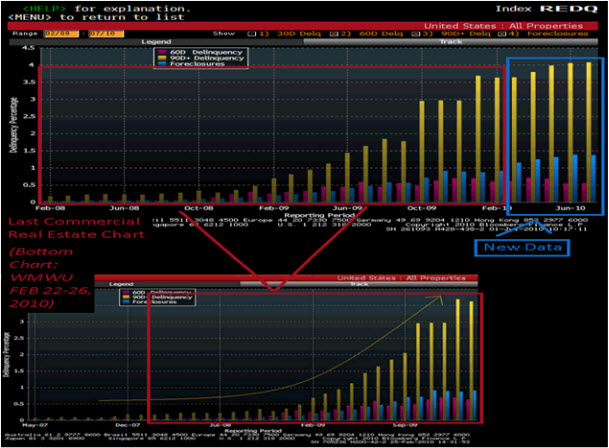 This week electric vehicle manufacturer Tesla Motors Inc. offered 13,000,000 shares in its initial public offering with selling shareholders maintaining 1,419,400 shares of Tesla at an offering price of $17 per share. According to Tesla’s Prospectus, Tesla Motors is a designer, manufacturer, producer, and seller of “high performance fully electric vehicles and advanced electric vehicle powertrain components.” The company believes that the auto industry is in a period of transition that requires a shift from traditional gasoline-powered combustion engines to a wholly electric-powered vehicle. As a result of the IPO, the company has raised $188,842,137 but it seems that this issue is an overly optimistic issue for a weak company in a weak market.

On its first day of trading on the NASDAQ, the company experienced a 41% surge from its IPO price of $17 to $23.99. This intense movement was a result of typical market optimism and traders attempting to take a quick profit from a new issue. The share price peaked at $30.42 and has witnessed a steady decline to just under $22. Volumes have also dropped off substantially to below 87,000 from a high on Thursday of 505,000, signifying that there are not enough buyers confident that the company is even fundamentally sound. From December 2005 till March of this year, Tesla Motors has lost over $231 million dollars and it has yet to turn a profitable quarter. The company even indicated in its prospectus that it still expects to experience an increase in losses because of a downturn in automobile sales.

Tesla only offers one vehicle, the Roadster Sport, which is priced at $100,000 and only on a reserve basis, meaning the consumer must wait for the firm to fulfill the order. The firm expects to release a sedan, known as the Model S, for $50,000 which it hopes to release by 2012; however, the auto industry is notorious for long lead teams stemming from regulatory compliance and lags in manufacturing. The speculators may have hold of Tesla’s shares for the moment, but one must not be fooled; the company does not look like it will be able to maintain its IPO price for very long.

Ireland out of Recession

Following the 2010 first quarter release of Ireland’s GDP with an increase of 2.7% on a seasonally adjusted basis, it may be fair to say that Ireland has officially surpassed the recession period as the country’s exports surged. However, the GNP declined 0.5% compared to that in the previous quarter.

Some of the factors that attributed to the increase in the GDP were the net exports which were €2,609 million higher than in 2009 and the increased volume of output of the industrial sector that increased by 7.7% in Q1 2010 compared to that of Q1 2009. This was due to the fact that the recent fall of the euro led to cheaper exports from Ireland to its biggest trading alliances in the United States and Great Britain.

The Irish Government lately has been striving aggressively to tackle the public deficits with fiscal measures including imposing higher taxes and reducing salaries in the public sector by 15%. However, these fiscal measures have been questioned upon and as stated in the New York Times by Paul Krugman – “Virtuous, suffering Ireland is gaining nothing” in reference to the high payments made by Ireland in order to finance its budget. These actions however, have been duly defended by the Irish ministers stating that the financial survival of the country would have been at risk otherwise.

Nevertheless, the decline in the GNP suggests that Ireland’s domestic economy at large has still not recovered since the gross national product does not take into account the foreign investment profits in the country. With no substantial decrease in the unemployment numbers, decreased consumer spending and capital investments, Ireland still has a long way to go.