Initial claims came in as expected in the range between 440k and 470k. This number is better than the previous 468k.  Continuing claims however continued to trend upwards (4565k from 4487k).  Consumer confidence dropped lower than expected and new home sales came in better than expected. This week’s numbers are largely bearish and indicate sluggish growth.  The GDP number will be released on Friday and is expected to be between 2.5% and 3.0% growth.

The DOW and the S&P continued to rise throughout the week, currently up .25% for the week as of Thursday. Conversely, the VIX has traded in a range throughout the week, but still down by -3.71% for the week as of Thursday.  The VIX is still at elevated levels compared with historical norms – an indication that uncertainty is still non-negligible in investors’ minds.

The Dollar traded down throughout the week versus the Euro. The pair gained 1.31% for the week as of Thursday, trading from the 1.29 level up towards 1.31. The Yen traded down early in week but rallied higher Wednesday and Thursday against the Dollar. The British Pound also traded higher throughout the week against the US Dollar. Initiating the week at the 1.54 level and rallying over 2 cents towards 1.56, a rally similar to the EUR/USD of about 1.30%. The Dollar continues to show weakness across the board. Its index has been in a downward trend since early in June.  Since the currency markets reflect one currency relative to another. The downward trend could be indicative of perceived weakness in U.S growth. 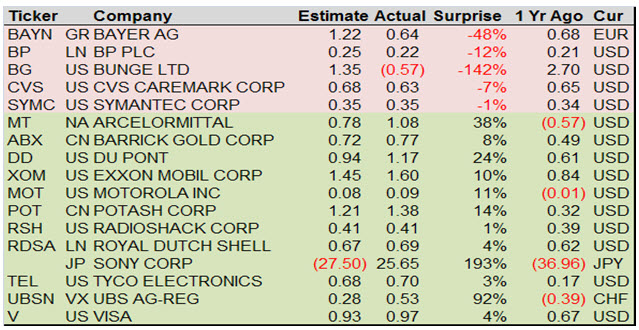 This week was full of major firms reporting their earnings for the second quarter of 2010. Earnings are used as an indicator for investors and business to gauge the current economic environment of the US. Many analyst and traders have noted the importance of revenue growth as we end the second quarter of 2010. This is due to investors awaiting a confirmation that the US is truly moving forward from the recent downturn. Throughout 2009, most analysts noted the importance of bottom line (net income). This was the case as investors wanted to know if companies would actually be capable of surviving the downturn and still be capable of making a profit, which was done primarily through cost cutting measures. As we enter the second half of 2010, many have noted that they want to see actual growth in business (using revenue as an indicator).

As can be seen in the table above, most firms beat analyst expectation of earnings per share for the quarter. Specifically looking into revenue and growth, companies like Exxon Mobile stand out. Beating analyst estimates by 15 cents per share (10% upside surprise), Exxon (XOM) reported its largest profit increase since 2003. Even more, revenue increase by 24%, QoQ. According to the conference call much of this was due to the increase seen in oil and gasoline prices, coupled with a substantial increase in production (output increased by 4 million barrels per day). With this growth, the company is one of the few who is current increasing capital spending amidst an uncertain economic environment. However XOM CEO Rex Tillerson has a positive outlook on the energy sector, noting an expect 3.4% increase in crude demand (outlook by IEA). They also made positive comments on the recent XTO acquisition, noting an expected increase in fuel from shale formations and other unconventional forms of energy extraction.

Investors have started to lighten their gold holdings in favor of equities amidst the precious metal’s fall to three- month lows. 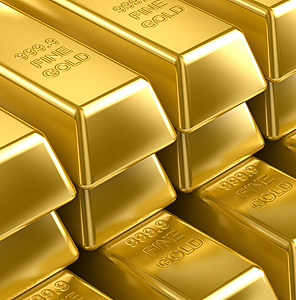 Gold rose to record highs of $1,264.90 an ounce last month as investors flocked to the precious metal on worries about the euro–zone sovereign debt problems and the slowdown in the global economy since it is often bought as a hedge against economic tumult.

On the other hand, as of Wednesday, holdings in the SPDR Gold Trust, the largest ETF backed by gold had its sharpest decline to 1,282 metric tons from 1,300 metric tons the previous day which was their biggest one-day drop since April 2008.

Even  though gold futures remain steady, it remains near the three-month lows with the most actively traded gold contract for December delivery on the Comex division of the New York Mercantile Exchange, down by 30 cents at $1162.10 an ounce.

However, this low price has enticed bargain hunters, speculators and Asian buyers which increased demand and led to its modest gains on Thursday as the stock market turned lower. Gold price for August delivery increased to $1163.70 an ounce with a 0.3% increase on the Comex division of the New York Mercantile Exchange.

Over the last few years, investors and fund managers have been actively seeking protection from highly improbable events known as “black swans.” This concept was first pioneered by former Wall Street trader Nassim Nicholas Taleb in his 2007 book The Black Swan. In an interview this week with Bloomberg reporter Ben Steverman, Taleb claimed that government debt and deficit levels are the next black swan that is quickly “becoming a pure Ponzi scheme” in a “world [that] has run out of suckers.” The Greek flash crash in April as the first step and it may continue as sovereign debt becomes riskier as governments continue to take on more leverage.

The concept has developed a substantial following among fund managers like Pimco’s Executive Vice President Richard H. Clarida. Clarida released an essay this month detailing that we are in a period of the “New Normal” which states that “the distribution of outcomes is flatter and the tails are fatter.” In essence, what investors have come to know or have been accustomed to for the last twenty years- such as stable growth prospects, globalization, and seemingly predictable returns- will no longer hold true. Even though his ideas seem to be in vogue for the moment, Taleb believes that fund managers are unlikely to stick to tail risk strategies because “they and their customers will give up at some point.”