“We had heard that one of the executives at Citigroup—one of the companies we visited—was a genius in his area, but it was hard to believe as he spoke to us in halting English,” said Maria Alejandra Bermudez, who participated in a study abroad as part of the Professional BBA program in the College of Business Administration at Florida International University (FIU). “When he realized that many of us spoke Spanish and he switched, his brilliance came through. It was a huge revelation about how language can be a barrier and how we mustn’t judge people just because they are struggling with their words.”

That was one of many insights Bermudez gained during the study abroad that took 42 students, most of them from the Professional BBA Sunrise and Weekend programs, to Spain, Italy and France, part of the time on a cruise ship. In addition to lectures at businesses in each location, the students were exposed to culture and had a once-in-a-lifetime chance to hear the pope speak in an auditorium at the Vatican.

Trip fosters students’ connections to each other.

For Doreen Gooden, the faculty leader—who planned the itinerary and shares the belief noted by some students, that study abroads offer “something you would not have learned sitting in a classroom . . . something you have to go and experience”—one challenge was to create a cohesive group from the Sunrise and Weekend groups.

“Initially, we tended to stay with the people we already knew,” said Bermudez, an international business and management major in the Weekend program. “But she helped us understand that as future business people, we have to integrate with others—another valuable lesson for me.”

“It was fantastic for everyone,” said Angie Letona, coordinator, Professional BBA programs, who helped handle logistics, along with Sonia Verdu, assistant director, Center for International Business Research and Education (CIBER). “Some students talked about it during a recent orientation for newcomers, and according to them it was a great professional, academic and life experience.”

“It was wonderful for me to see firsthand how the work we do here in Miami turns into an amazing and enriching experience for the students,” Verdu said. “The transformation is a phenomenon worth witnessing.” 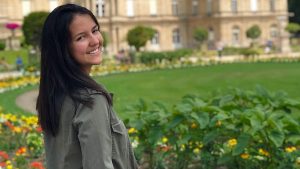