Your next money-making opportunity is in the last place you’d think to look.

The streets of Lima, Peru, are lined with slot machine parlors and stoplight vendors. Vans bulge with passengers as their drivers run red lights and the vehicles spew exhaust. Stray dogs, beggars, and nursing mothers mill about. But James Harmon only sees the cranes dotting the skyline. 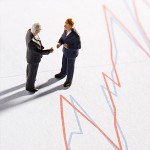 Harmon is a frontier investor, and he’s disposed to spot opportunities hiding amid chaos. Today he’s touring a new pasta-making factory in a nondescript hangar tucked behind high walls and a double security gate. He’s excited about the prospects for Alicorp, a $1.3 billion food manufacturer and a standout in Harmon’s $200 million Caravel Fund, which is up 26 percent this year and 221 percent in the six years since it launched. “They’re now churning out 10 times the noodles in half the time,” Harmon, 74, yells over the roar of brand-new Italian machinery. He’s wearing a hard hat with his suit, and errant bits of macaroni bounce off his freshly shined shoes.

In the span of two decades, Peru has graduated from near-failed-state status to a stable democracy with an investment-grade credit rating and some of the most consistent economic growth in the world. Its unlikely comeback is just one case study in the booming frontier, the extreme edge of emerging-market investing: Pakistan. Ghana. Egypt. Bahrain. Lebanon. Cypress. Kenya. In 2005, Goldman Sachs (GS), having already coined the term “BRIC” to refer to Brazil, Russia, India, and China, introduced the “Next 11” (N-11), positing that Bangladesh, Egypt, Indonesia, Iran, Korea, Mexico, Nigeria, Pakistan, the Philippines, Turkey, and Vietnam were poised to rival the G-7 in economic influence in the 21st century. “The astute investor is now zeroing in on the next wave of developing nations—the late bloomers, the ones that have been flying under the radar screen,” says Jerry Haar, an associate dean of the business school at Florida International University in Miami. The great equalizers, Haar says, are newfound macroeconomic stability, microeconomic reform, and consumer growth led by a rapidly expanding middle class—especially the lower middle class. It’s a major reason why the International Monetary Fund expects emerging and frontier markets to grow at nearly three times the average rate of the developed world. “The bottom of the pyramid,” says Haar, “is discovering banks, credit cards, and the many joys of capitalism.”

Read: “Investing in Frontier Emerging Markets,“ an article from the Bloomberg Businessweek.