The days when “you could kick around an idea and have a concept and get some chunk of money to get it going are gone,” said Irma Becerra-Fernandez, director of Florida International University’s Pino Global Entrepreneurship Center. 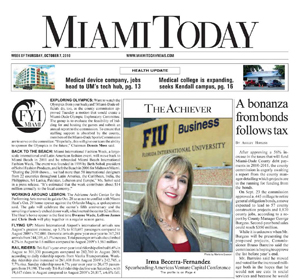 Her career has taken her from Florida Power & Light Co. to the knowledge management and technology transfer divisions of NASA and now to the halls of FIU.

She took the reins of the center, which seeks to show students and the greater business community the path to success in start-up ventures, about a year ago and has had her work cut out ever since.

Though one of her biggest challenges was ensuring the center was properly funded and sustainable during the economic downturn and severe budget squeeze, she’s managed to implement a handful of new initiatives.

In November, FIU will host the inaugural Americas Venture Capital Conference, a two-day event that will bring entrepreneurs and venture capitalists from across the hemisphere together to learn about emerging business sectors in Latin America and funding opportunities here.

The event could help establish Miami as the crossroads between the many innovation centers in America and the fast-growing economies to the South.