The architecture of the university has traditionally been required to create two faces or worlds. The first is the image presented to the public, a façade to address the city with the dignity to express the aspirations of the institution. The second is the interior, characterized by a fine delineation of public and private space.

This interior world is a microcosm of the city, a series of public spaces – perhaps a quadrangle or court, dining halls, corridors, libraries and places for communal study – so that the building both addresses the metropolis and creates it anew inside.

In those microcosmic worlds, you can occasionally glimpse the vision of academia, a simulacrum of the image in which the institution would remake the world outside. So what is the image that business schools project? Corporate ennui? The grimly repetitive glass of the global central business district? Until recently, that was exactly the universal business school aesthetic. Unlucky to coincide in their late-20th-century genesis with the nadir of the dumb corporate box, business schools’ architecture was rarely – if ever – a key concern. The world’s future business leaders emerged from the dimmest of buildings. 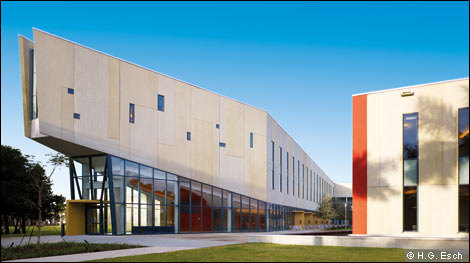 Radically different is the same architects’ Chapman Graduate School of Business at Florida International University, Miami. The building’s prow-shaped entrance pavilion juts into the landscape and leads to a palm-lined courtyard with open arcades in a tropical architecture that takes advantage of climate and greenery to create a counter-point to the traditional internalized school.

Read: “Outside the box: new architecture for business schools,“ an article by Financial Times.