The stock market ended the week on Friday with a plunge after the Labor Department’s nonfarm payrolls reported an increase of 18,000 jobs for the month of June. The figure was substantially below economists’ expectations which forecasted a rise of 125,000. On top of this, the June unemployment rate increased for a third month in a row to 9.2%, a 2011 high. The S&P 500 fell1.2% and the NASDAQ fell by 1.1%. The CBOE Market Volatility Index (VIX) rose by 3.5%, nearing a 4% weekly gain. The VIX (also known as the “fear index”) is used by market analysts to measure the market’s volatility, thereby gauging a level of investor “fear” in the market. The jobs report came as a surprise to economists since Thursday’s ADP survey showed that the private sector had added 157,000 jobs to the economy in June, beating expectations. 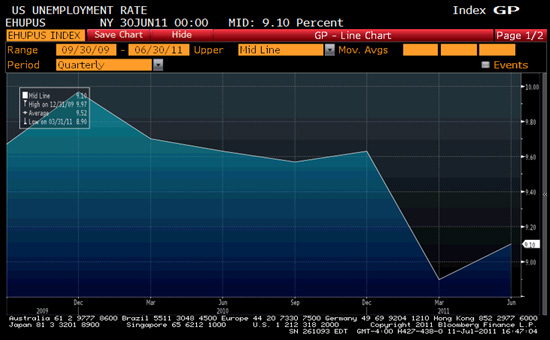 June’s jobs report reflects a lack of expected job growth with the ills of unemployment being felt by millions of Americans two years after the official ending of “The Great Recession.” Feeling the necessity to address the public after Friday’s nonfarm payrolls report, President Obama appeared in front of reporters in the White House Rose Garden. Here the President addressed the issue of debt reduction by way of passing a congressional deal to raise the debt ceiling and what he believed to be a major contributor to the lack of recent job growth: business uncertainty over the debt debate. “The sooner we get this done, the sooner we give business the certainty they need to grow and hire.” The President reiterated his commitment to U.S. job growth and stated that the June nonfarm payrolls showed that “we still have a long way to go and a lot of work to do.”