The world witnessed a roller-coaster stock market last week.  One of the most notable headlines was the historic weekly activity of the Dow Jones Industrial Average: 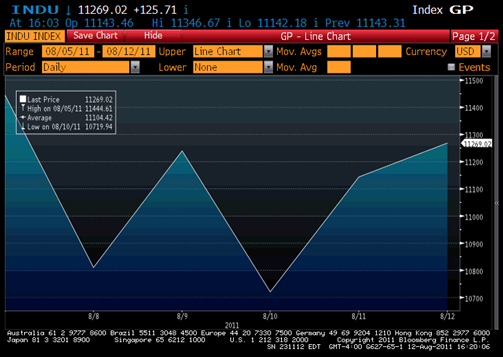 The Dow closed Friday with a 125-point gain after its record week of 4 consecutive days of 500-point swings. The Volatility Index (VIX) traded near its highest levels since the 2008 Financial Crisis. Such market volatility reflects the great uncertainty and fear that traders and investors have over global economic prospects. This uncertainty is shared among many Americans as U.S. consumer confidence fell in August to its lowest level in 30 years (May 1980).The S&P 500 also endured a tumultuous week. During the August 8th U.S. trading session (the first trading session after S&P credit rating agency downgraded U.S. debt to AA+), the S&P suffered its steepest decline since December 2008 by 6.7%. On August 9th the S&P recovered after the Federal Reserve said it would leave its benchmark interest rate close to zero through at least the middle of 2013. The index declined 4.4% on August 10th and rose by 4.6% the next day. As of August 12th, the S&P was down 13% from a 3-year high achieved this past April.

Global economic uncertainty has been a key factor in the overall dismal performance in world financial markets for the past two months. Since July 26th, global equity markets have lost value at the estimate of $6.8 trillion. This massive loss can be attributed to the downgrade of U.S. debt, uncertainty of Congress’ ability to effectively deal with America’s fiscal woes, and the deepening of the Eurozone’s debt crisis. As the United States and Eurozone nations seek out solutions to their respective weakening economies in the midst of increasingly burdensome government debt, such economic and fiscal problems have created new problems for other economies, particularly Switzerland’s. Switzerland is famous for being a safe-haven for storing money during times of uncertainty. As this has been the case for the past few months of global economic uncertainty, there has been an overflow of demand for the Swiss franc, which has led to the currency’s overvaluation. In response, there have been discussions of market intervention by the Swiss National Bank to curb the strength of the franc. The overvaluation of the franc has been a blow to the Swiss economy as exports have increasingly been unable to compete with other exporting nations. Last week stirred up debate as to whether the SNB should peg the franc to the euro; long-term economic effects of such a move remain uncertain (both positive and negative).