Walking through airport lounges, surfing channels in my hotel room, I’m struck by how many kung fu fights and ancient grand battles fill the screens. I suppose this is China, after all, native home of Bruce Lee and Sun Tzu. 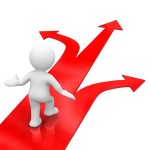 I usually switch channels pretty quickly, hunting for some Bloomberg TV before I hit my bed, but on this scene I stop. There is a kung fu master flying through the air, showering his opponent with a flurry of fists too fast to see. The enemy, still reacting to the first strike while the second strike flies in, grows flustered and falls into the arms of his friends.

It strikes me that this is not unlike what we did all that day in a conference room 26 floors below. I spent the day working with a group of technology executives developing a strategy to beat a dominant competitor out of a critical, emerging market segment. Over eight exhausting hours, we generated nearly 100 potential strategies, and from those, assembled a complex web of about 10 that we think will fluster the competition. As Sun Tzu wrote, you should set multiple traps so that if your adversary doesn’t step into one, they back up into another.

I’ve run such strategy sessions a few hundred times now, but I’ve never seen a team follow the process with such methodical patience. The outcome was lethal.

If you want to fluster your competition, you need to launch a flurry of disruptive strategies at them. Here are four steps to follow.

You can go to kaihan.net, click on the “stratagem selector” and use this free tool to identify four strategic patterns, or stratagems that you want to apply to your competitor. If you are not sure which to use, then use these four (which my research says are generally the most important to know now):

Finally, choose the seven to 10 ideas that are the easiest to execute and will prove most disruptive to your competition, and make them happen.

You competitor will have no idea what hit them.