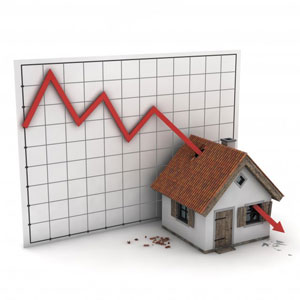 NEW YORK (CNNMoney) — The housing market started the new year with a thud. Home prices dropped for the fifth consecutive month in January, reaching their lowest point since the end of 2002.

The average home sold in that month lost 0.8% of its value, compared with a month earlier, and prices were down 3.8% from 12 months earlier, according to the S&P/Case-Shiller home price index of 20 major markets.

Only three of the 20 index cities registered gains in January, led by Phoenix, which climbed 0.9% month-over-month, Washington, up 0.7%, and Miami, which edged 0.6% higher.

Home buying much cheaper than renting Housing market indicators have sent confusing signals so far this year, with existing home sales and new home sales down month-over-month in February, but up year-over-year.

Potential homebuyers lack confidence in the market, according to Michael Feder, CEO of Radar Logic, an analytics company that produces daily spot prices for real estate. A big problem looming is a massive number of potential foreclosures.