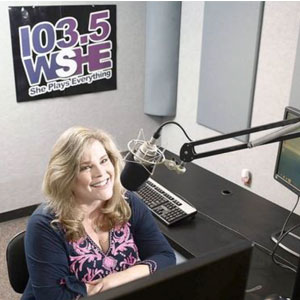 Clear Channel resurrects some familiar call letters, but the song does not remain the same.

But this new WSHE rocks to a different beat.

In late May, Clear Channel Media and Entertainment Miami flipped formats, from Spanish music station WMIB to adult contemporary. WSHE plays hits from the 1970s through the 2000s, or as director of sales Lonny Anger says, “SHE plays everything,” which is also the station’s new catchphrase.

“It’s primarily the ’80s and ’90s, with a splash of the ’70s and 2000s,” says Anger, who is also the interim market manager at Clear Channel’s Miramar studios. “It’s adult variety. There are some songs that we certainly cross over with other stations, but  there are others you are not going to hear anywhere else except ours.”

Anger says WMIB had a tough time competing in the Fort Lauderdale-Miami market, which is cluttered with Spanish-music formats.

“You switch formats for one of two reasons: ratings or revenue. In our case, it was both,” says Anger, who wanted to better reach listeners ages 25 to 54, the demographic coveted by advertisers.

In April, before the format switch, WMIB had a 2.4 percent share of listeners in the Fort Lauderdale-Miami radio market  and ranked 20th overall. In contrast, Spanish contemporary hits station WAMR 107.5-FM had a 5.8 percent share and ranked second, according to ratings company Arbitron.

“There is a lot of duplication among the Spanish music stations,” Anger says. “We thought there was a hole in the marketplace for [English-language] adult-hits music.”

Unlike WMIB, the new WSHE doesn’t have any DJs. The cool, teasing WSHE voice in promos belongs to Kelly Craig, a former longtime WTVJ-Ch. 6 anchor.

“Our format is no format,”  says Craig, who has also been a regular guest on “The Paul and Young Ron Morning Show” on classic rock WBIG 105.9-FM for three years.

One of the station’s new features: airing 103 minutes of uninterrupted music at 8 a.m. and 4 p.m.”You never know what we are going to play next,” Craig says. “It’s kind of like putting your radio on shuffle.”

One marketing professor says she can understand why Clear Channel decided to resurrect the WSHE name.

“Often, marketers will reintroduce familiar brands or brand names that consumers know and have good feelings about, because it gives them a ‘leg up,’ so to speak,” says Kimberly Taylor, a marketing professor at Florida International University who remembers the original WSHE. “Former listeners would probably tune in because they remember the old WSHE format and want to see how this new station compares.”

The old WSHE didn’t disappear entirely, at least in spirit.

Two  Internet radio stations  are inspired by the original WSHE. ShesOnlyRocknRoll.com plays classic rock presented by DJs such as Cory James and Robin Martin, who worked at the old station.

The other outlet, RadioShe.com, also claims to play the kind of music that aired on the first WSHE.

Anger doesn’t think there will be brand confusion among the outlets.

“They play what they want to play,” he says. “SHE plays everything.”

Read: “SHE’s not only rock ‘n’ roll (but they like it)” by SunSentinel.com