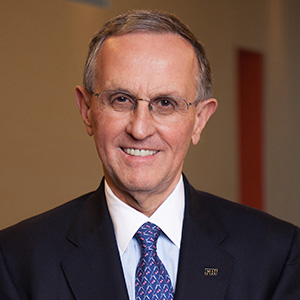 Florida International University (FIU) College of Business Dean David R. Klock held his first open forum for students on November 13, sharing his admiration for the college’s diversity and creativity, and pledging to build on its strong faculty.

The “Dean Wants to Meet You” invitation drew an overflow crowd to the college’s lobby for conversation and a pizza lunch. It was also an opportunity for Klock, who came to FIU on October 1 from the University of Alabama at Birmingham, to engage in a dialogue with students.

Relating his background as a milkman’s son who became an academic leader and successful entrepreneur, Klock told students he was drawn to FIU by its reputation as a place where hard-working students were bound for great achievement.

“When I told friends I was coming here, the response was, ‘You’re going to one of the most innovative and creative universities in the country, with a diverse student body that every Fortune 500 company will want to hire,’” he said.

Klock spoke about his intention to improve the learning experience by hiring more faculty to reduce the faculty-student ratio.

“My number one goal is to find the resources, internally and externally, to dramatically increase faculty numbers,” he said. “We have outstanding scholars from around the world. The only issue I have is that we don’t have enough of them.”

Klock urged students to get to know the faculty and maintain these relationships throughout their careers, a practice he maintains. While he was chair of the Finance Department at the University of Central Florida, one of his former students at the University of Florida brought him into the business that became CompBenefits, a dental insurance provider. Klock’s team grew CompBenefits to $350 million in revenues before it was sold to Humana.

“Years from now,” he said, “you won’t have a clue who the dean was, but you will remember the professors who touched your lives.”

Students asked about a wide range of issues, including creating new traditions at the college, building more entrepreneurial opportunities and allowing finance majors to take courses in accounting. After the talk, students remained to introduce themselves to the dean, ask additional questions and pose for photographs.

Stephen Mitchell, a senior majoring in accounting and finance and a member of the men’s track and field team, attended the talk and liked what he heard.

“The dean seems very engaged and responsive to the community,” said Mitchell, whose plans include studying for the CPA and possibly continuing for a master’s degree. “I would like to suggest that he do this annually.”