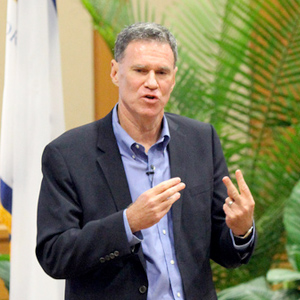 As Gerry Cahill explained it, he started life as a less-than-promising student who flunked first grade. Yet by taking calculated risks and working hard in every job he was given, Cahill’s career path brought him to the top job at Carnival Cruise Lines, the flagship brand of Miami’s Carnival Corp.

“Carnival Cruise Lines: A Cultural Transformation,” was presented by Florida International University’s (FIU) Center for Leadership (CFL) on January 22nd, as part of the center’s The Leadership Lectures series, with support from Mercantil Commercebank. Cahill shared a candid look at his career as well as leadership lessons he learned in remaking one of the world’s most successful brands.

“Gerry is direct, up front, no holds barred,” said Modesto Maidique, CFL director, who introduced Cahill to an overflow crowd at FIU’s College of Law and several remote video locations. “It’s a fresh approach coming from a CEO.”

Cahill learned about the importance of taking calculated risks from his father, in addition to the importance of committing to long hours and hard work. He rose through the ranks in accounting, and later, in the world of corporate finance. As chief financial officer of Carnival Corp., he became fascinated with the operations side of the cruise business, and was asked by Carnival chairman Micky Arison to take the reins at the flagship brand in 2007.

Making the leap meant making a commitment to mastering a wide range of skills demanded of a leader, and serving as top ambassador for a highly playful brand. He has addressed large audiences of travel agents in short gym shorts one time, and a feather boa at another.

“They asked me to do things that were fun,” he said. “It’s not easy to make an accountant fun.”

A new focus on the playful nature of the brand is part of Carnival’s revamped focus. Rather than court the high-income market, the cruise line’s new strategy focuses squarely on the middle class, with more affordable pricing and opportunities to sample new branded items with surcharges.

“We want to provide memorable vacations at a great value,” he said. “That’s what we do better than anyone else.”

Cahill molded a new leadership team capable of ushering in change, choosing those who balance his own analytical nature with people skills. Above all, he said, was the need for a leader to constantly reexamine a business, even a successful one, in light of changes in the world.

“Every big company at some point had better go through at least one or more cultural transformations,” he said, “or they won’t survive.”

Many attendees who gathered for a reception after the talk identified with Cahill’s straightforward approach to leadership.

“It was a source of inspiration, in that it was so real,” said Beatriz Junco-Gonzalez, vice president of corporate communications and responsibility manager for Mercantil Commercebank. “Anyone who works in an organization undergoing significant change can really connect with him.”