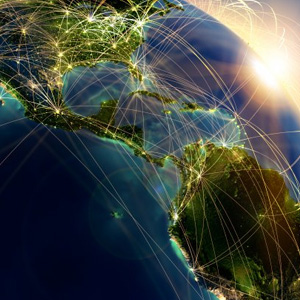 Alex Mantovani scanned Miami’s financial district from the fourth-floor office of Brazilian digital marketing company Grupo Avadora he opened in January. Golden keys to the city and the county, symbols of welcome, lay on a table.

Avadora represents an opportunity for Miami-Dade County as it battles an unemployment rate higher than Florida’s and the nation’s. More than 700 multinational companies have been lured to the area over the past quarter-century, drawn by its proximity to Latin America and the Caribbean and a multilingual workforce. The largest have set up regional headquarters, such as the FedEx Corp. hub that has 396 employees.

Most use Miami offices to coordinate operations in Latin America. Now the county is trying to attract firms such as Avadora that want a toehold in the U.S.

“We’re always very interested in the high-paying corporate jobs from Latin American headquarters here,” said Jaap Donath, senior vice president for research and strategic planning at the Beacon Council, Miami-Dade’s public-private economic development group. “Now we’re getting to ones that are successful in Latin America and are moving into the U.S. market.”