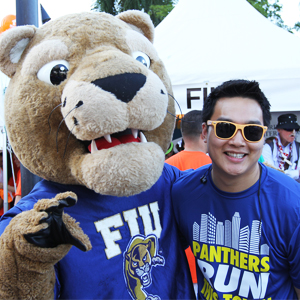 Call it a self-paced athletic event or “South Florida’s largest office party,” for 28 years, runners and walkers have been drawn to the Mercedes-Benz Corporate Run 5K. On April 25, 2013, more than 25,000 of them, from over 800 companies, participated in the Miami portion of the three-race series.

The College of Business at Florida International University (FIU) was FIU’s primary sponsor and took advantage of the opportunity to increase awareness of FIU’s Brickell facility— FIU Downtown on Brickell—and Panther Pride.

Team FIU’s 237 participants—up from 56 in 2011 and 106 in 2012—were decked out in premium athletic, dry fit shirts. The t-shirt design, with the slogan “Panthers Run This Town,” was selected from three options posted on Facebook and voted for by “likes.”

“We parked the wrapped Worlds Ahead bus—which is normally used to transport students from the Modesto A. Maidique Campus to the Biscayne Bay Campus— along the race course on Biscayne Boulevard,” said Veronica Perez (MBA ’12, BBA ’08), marketing manager, Marketing & Communications Department. “In that position, it served as a billboard, plus Roary cheered the team on as they crossed the finish line.”

The other races in the series take place in West Palm Beach and Fort Lauderdale. 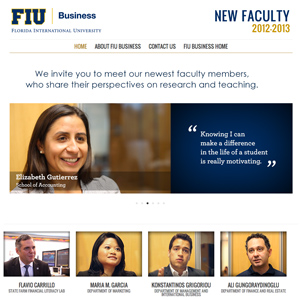