Despite a lower-than-expected consumer confidence and retails sales reports, U.S stocks closed higher on Friday with the Dow posting its second best weekly gain this year and the S&P on track for its biggest weekly gain in two months. Although equities have recovered much ground from the August selloff, the yield of the benchmark U.S 10-year treasury was pushed down slightly after the release of weak economic data. 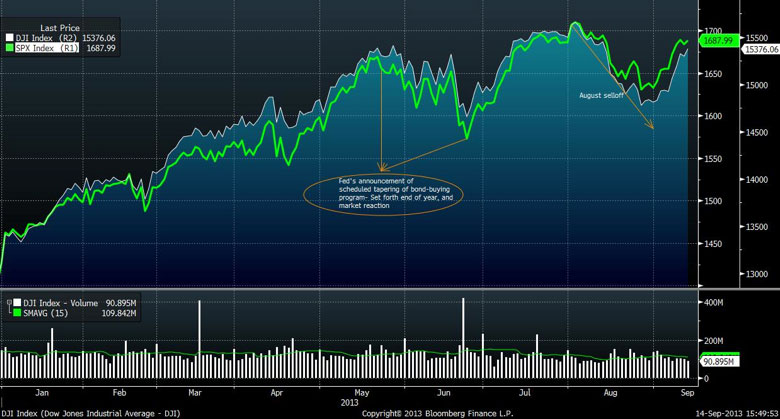 U.S stocks and Treasuries inched higher even with the release of weak economic reports illustrating slow growth in retail sales and the Thomson Reuters consumer-sentiment index fall of 5.3 points from 76.8- the lowest since April- from a final August index of 82.1.

The fall of the sentiment gauge from the highest level in six years indicates consumer’s grim outlook on the economy, as mortgage and interest rates have advanced higher on a steady pace since early May. With the 30-year fixed mortgage rate hitting 4.57%, from 4.52% a month earlier; and the 60 month auto rate of 2.80%, from 2.52% in August.

The sluggish pace of growth of the economy coupled with increasing interest rates have directly affected consumers, with a noticeable scale back on retail spending. Additionally, the growing concerns about further U.S involvement in Syria and reports of weak employment growth are likely to be topics addressed by policymakers in the Fed meeting set forth this week. In addition, the weak reports pushed down the dollar against its European and Asian counterparts.

Nevertheless, stocks on Wall Street advanced higher, placing the benchmark S&P 500 index on track for its largest weekly gain in two months and the Dow average soaring +2.60% for its biggest gain in more than eight months.

The session ended with all key sectors in the green: Financials, up 19 bps to 271.33; Energy, up 5 bps to 610.62; Consumer Staples, up 81 bps to 417.52; Consumer Discretionary, up 32 bps to 476.14; Technology, up 3 bps to 519.22; and Healthcare, up 25 bps to 591.02.
The rally in stocks despite the recent economic data could be, in part, due to market participants forecasts as to whether the Federal Reserve sees a sustainable economic development sufficient to begin the tapering of its bond-buying program. Stay tuned as we bring updates on the Fed’s policy meeting this week.