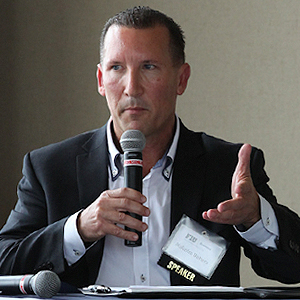 Real estate development is a complex business – multiplied by 10 in an area as multi-faceted as southeast Florida.

Students in the Hollo School of Real Estate at Florida International University (FIU) got to learn more about the subject from a man not only deeply involved in the business but also an FIU alumnus.

Malcolm Butters (MSRE ’83), president and co-founder of Butters Construction & Development, Inc., was the keynote speaker at  the most recent Developer Luncheons hosted by the Jerome Bain Real Estate Institute in the College of Business. The event, moderated by instructor Suzanne Hollander, was held October 24, 2013 at the Rusty Pelican in Miami.

Butters, considered one of the most innovative builders in the area, spoke on a variety of subjects, including quality development. Public transportation was also a focal point.

“There’s too much traffic in Brickell and soon enough it’s going to implode,” he said. “We need to start talking more about mass transit in South Florida.”

“The people mover works well for those who reside in Brickell but we need to start considering other options,” added Adam Vaisman, Butters’ director of acquisitions, also at the event.

Almost 90 students, alumni, faculty and real estate professionals attended the luncheon, which proved to be an excellent networking opportunity.

Butters told the audience that an economic driver to the South Florida community will be the expansion of PortMiami, already the second largest revenue producing department in Miami-Dade County.

Importance of personal relationships was among the topics.

Over the past 22 years, Butters Construction & Development has built over 11 million square feet. But its president still sees a huge need for one-on-one communication.

“I worry about some of the personal dynamics in real estate being lost,” said Butters, a member of FIU’s Entrepreneurship Hall of Fame. “The people who do well have a personal touch. It’s very simple. You need to pick up the phone, request to have a meeting, invite people to a working lunch.”