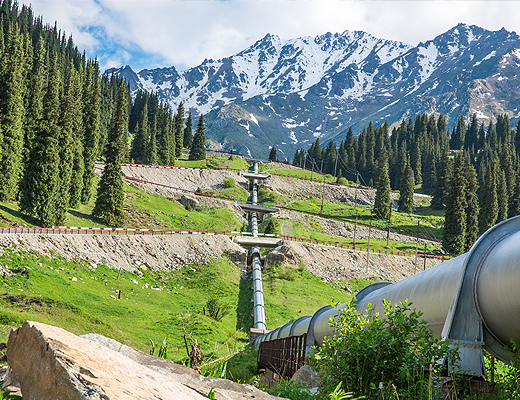 The United States would do well to move forward on the project.

Oh, Canada! Blessed by proximity to the United States, cursed by its politics.

The ongoing saga of the Keystone XL pipeline best illustrates how a thriving trade, investment, and security relationship with our most important ally is being strained by a feckless White House, pressured by a mischievous cabal of environmental activists, anti-fossil fuel lobbyists, and an assortment of left-wing zealots.

But the Keystone XL pipeline goes beyond disrespecting our northern neighbor. The greater outrage is the failure to give the green light to a project that brings multiple benefits to the American public. For those who believe that politics often trumps logic and common sense time, there is no better example the Keystone XL project.

The pipeline is a TransCanada Corp $7 billion project that involves the construction of a 1,179 mile pipeline from Alberta, Canada, to Steele City, Nebraska, where it would link to a previously approved pipeline and carry over 800,000 barrels of crude from Alberta’s oil sands to U.S. Gulf Coast refineries.

The benefits of the pipeline far outweigh any negative features, including risks that may result from Keystone XL. Jobs, tax impacts, and competitiveness would be big winners from Keystone XL. The pipeline would create 42,000 direct and indirect jobs and plow $20 billion into the U.S. economy. Spinoff activity from Canadian oil sands would generate $45 billion while supporting 465,000 jobs in the United States by 2035. And lest we forget, the United States receives nearly 90 cents from every dollar spent on Canadian goods and services compared to less than 29 cents from Venezuela and the Middle East. As for taxes, TransCanada invests heavily in infrastructure throughout the United States, helping counties afford road improvements, bridges, and schools. In testimony before Congress, the CEO of the Norfolk Chamber of Commerce (Virginia) cited $1 million in tax dollars collected for infrastructure development due to TransCanada. And Nebraska, the key link of the pipeline, would benefit to the tune of $135 billion in state and local levies from Keystone XL. As for competitiveness, U.S. manufacturing, slammed by increasing governmental regulations, high taxes and labor and health care costs, would benefit significantly from lower energy prices, courtesy of Keystone XL piped oil displacing higher priced Venezuelan oil.

Energy security is another issue where the Keystone XL pipeline benefits the United States, a nation still dependent on foreign supplies for 45 percent of its petroleum needs. With Mexico struggling to maintain its heavy crude output amidst declining exports and concerns about political stability in the Middle East and Gulf States and uncertainty in Venezuela, it is imperative that the United States reduce its dependence on these sources of oil. The good news is that hydraulic fracking, shale, gas and the Canadian oil sands will lessen the need for imported crude oil; and by 2035 North America will become a large exporter of energy.

Finally, there are the environmental and safety concerns that comprise the major arguments of opponents of the Keystone XL pipeline. To begin with, TransCanada not only meets but exceeds industry standards in its operations, utilizing world class technology. As for the chemical composition of oil sands, the oil (and emission levels) is no different than that from Nigeria, Venezuela, Alaska, and California currently flowing through the U.S. pipeline system. Moreover Albertan oil has been coming into the United States for some time.

The U.S. Department of State’s latest study, after more than five years of investigation, has found that the Keystone XL pipeline will not negatively impact climate change, resulting in more greenhouse gas emissions. Even if President Obama rejects Keystone, the crude will travel via other means (rail, barge) with greater risk of more greenhouse emissions and higher likelihood of an accident as happened last year near Philadelphia, in North Dakota, and in Quebec Province where a rail explosion killed 47.

For those who ask: “What about alternative energy?” These sources are not the answer, as they will grow to only 13 percent of energy needs by 2040. Meanwhile, the U.S. invested $71 billion on carbon-reducing technologies between 2000 and 2010; and much more will be spent in the coming years.

Out of respect for our northern neighbor and the wishes of the vast majority of American citizens (82 percent in a recent poll) the White House needs to get off the fence and give thumbs up to the Keystone XL pipeline.

This column originally appeared in The Latin Business Chronicle on February 21, 2014.