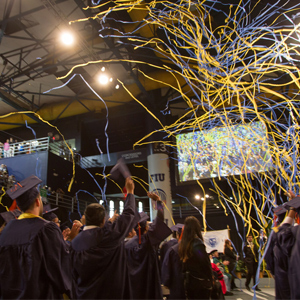 Immense pride and heartfelt joy filled the U.S. Century Bank Arena on Sunday, April 27, 2014 as 958 students in the College of Business at Florida International University (FIU) received their business degrees, as their friends and relatives, along with Dean David R. Klock and the College of Business faculty witnessed the occasion.

Later in an evening commencement ceremony, Dean Klock awarded a master’s degree from the Alvah H. Chapman Graduate School of Business to 315 students.

Since 2010, FIU has recognized students who exemplify the “Worlds Ahead” philosophy of the university. At the Spring Commencement, five Worlds Ahead Graduates were from the College of Business:

Suyen Fernandez (BBA ’14) graduated with a double major in finance and management and a minor in accounting. A member of Delta Phi Epsilon, she also volunteered for the Cystic Fibrosis Foundation, the Children’s Miracle Network and the VITA program. She helped establish the new Financial Planning Association at FIU and was chief of staff for the Student Government Association. In April, Fernandez represented the business college at the Worlds Ahead Tour for alumni in New York.

Jerome Lynch (BBA ’14) transferred to FIU in 2012 from FAMU to be closer to family. He joined the Association of Latin Professionals in Finance and Accounting (ALPFA), serving as president then consulting officer. The chapter was recognized as the South Region Student Chapter of the Year and Lynch was on an ALPHA team that won first prize in Johnson and Johnson’s National Case Competition in 2012. Lynch, also a member of Toastmasters, is joining the merchant leadership program at Walmart corporate headquarters.

Arian Sheremeti (BBA ’14) had to flee his troubled country of Kosovo and live in England and Canada before coming to Miami and FIU. He earned a 4.0 GPA while working in FIU’s Human Resources Department and volunteering on behalf of the Honors College. He received a Bachelor’s in Business Administration with a major in management of information systems and a Certificate in Business Intelligence. He has been accepted in the Master of Science in Management Information Systems program at FIU.

Maximilian Staedtler (BBA ’14) excelled at case competitions, including first place in Google’s 2011 event. Staedtler served as president of FIU’s ENACTUS, led  volunteer efforts at the Honors College, served as a resident assistant, was president of the college’s Phoenician Investment Fund and earned a 3.99 GPA. After two New York summer internships, he was selected as Goldman Sachs’ first Campus Ambassador for FIU and now he has secured a full-time position at the firm.

Vanessa Vazquez (MBA ’14) is involved in the national Tuberous Sclerosis Complex (TSC) Alliance. She founded the Miami Step Forward to Cure TSC Walk, now in its sixth year, raising more than $128,000 to help people like her six-year-old son, who was born with TSC. Vazquez met with national officials to advocate for TSC patients, and developed a product designed to help TSC families; her product was a semi-finalist in The Miami Herald Business Plan competition. Vazquez, who also volunteers with EcoWorks to help the people of Haiti, is assistant director of event management in the Graham Center.

Marjorie Castillo (BS ‘14), a student assistant in the Office of Advancement, received her bachelor’s degree in Criminal Justice. She will begin studying for her law degree this fall at American University in Washington, DC.

Srinivas Rao Cheeti (MS ’14), a graduate assistant in the Finance Department, received his Master of Science in Information Technology.

Cesar Garcia (MBA ’14), operations manager in the MBA Programs Department based in Brickell, received his Master of Business Administration.

Lisset Pinelo (BA ’14), a program assistant in the MBA Student Services team, received a Bachelor of Arts in Sociology/Anthropology and a Certificate in Women’s Studies.

Maria Sanchez (BBA ’14), a student assistant in the Management and International Business Department, majored in Marketing and received her Bachelor of Business Administration degree.

Claudia Sifontes (BA ’14), a program assistant in the Health Management Programs department, received a Bachelor of Arts degree in Psychology.

Maximilian Staedtler (BBA ’14) who was cited  as a graduate receiving Worlds Ahead recognition also worked on campus as a student research assistant. 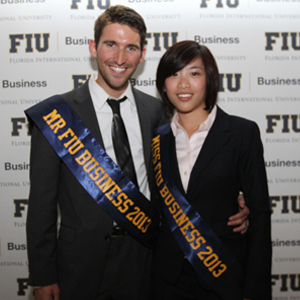 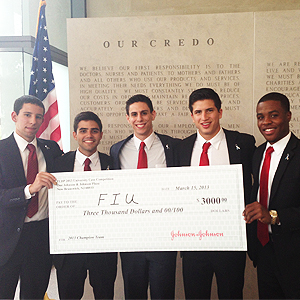