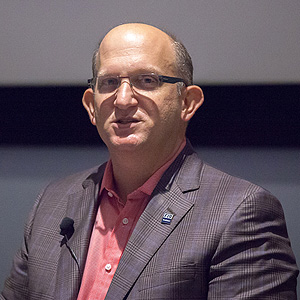 Delivering the right message at the right time to consumers has always been a challenge for marketers. Add to that a fast-changing media landscape and increased reliance on social media and the battle becomes even tougher.

“You have to be a great storyteller and find creative tension,” Kappitt, an FIU graduate (BBA ‘92). “Look at the data, understand consumer trends, leave no dead ends, and wake up angry – to know what your competitors are doing and how to get ahead of them.”

“The customers’ voice today is louder than ever,” Kappitt said during the October 15 event at FIU’s Modesto Maidique Campus. “Word of mouth is the most powerful form of marketing and social media is giving people more outlets to say what they think about restaurants.”

A marketing veteran, who originally majored in accounting at FIU, Kappitt has placed business intelligence and consumer analytics at the core of his marketing strategy.

“I got into marketing through the analytical route,” said Kappitt, who admitted that struggling in his last auditing class led to his abandoning the accounting sector. “As marketers we’re students of the consumer. What we’re looking for is there… we just have to find it.”

Kappitt joined Bloomin’ Brands in 2011 as CMO of Outback Steakhouse and last December was promoted to CMO of the full company. Before that, he spent nine years at Burger King, where he eventually became North American CMO.

Under Kappitt’s leadership, Outback introduced the “Great Aussie Steak Out” which gave away one million steaks to introduce its wood-fired grill cooking technique. The marketing campaign featured billboard ads with a picture of a juicy smoking steak.

Although the smoke was just an illusion generated by smoke machines, more than once drivers called local authorities to report the billboard fires. The “burning” billboards near Atlanta led to a news story on CNN, a 75-second segment where the reporter restated the campaign’s tagline – “Wood Fire Grill. Good for steaks. Bad for Billboards.”

“I couldn’t have paid for that kind of publicity,” said Kappitt, generating laughs from the audience. “To stay relevant, you have to innovate. Or you die.”

Keeping a close eye on the consumer, Kappitt and his Bloomin’ Brands team have their sights set squarely on three customer bases – boomers, millennials and Hispanics.

Reaching out to millennials, Outback Steakhouse unveiled a bar menu of shareable items at value prices and is partnering with brands like Red Bull as well as expanding cause-related marketing initiatives. Looking to connect with Hispanics, the restaurant in 2013 launched its first-ever fully integrated Spanish-language marketing campaign.

“If we’re not planting those seeds now, we’re going to be in trouble in 10 years,” Kappitt insisted.