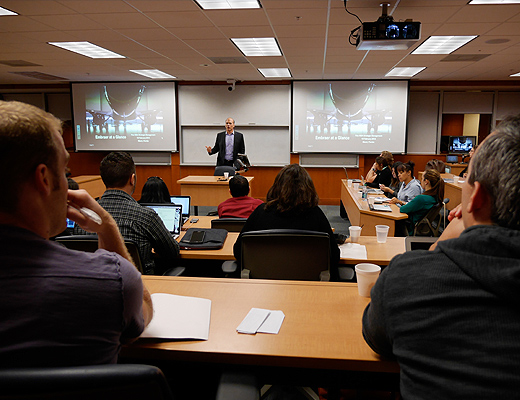 David W. Barman (JD ’05), instructor, was named as a “Legal Elite for 2014” by Florida Trend magazine, voted on by members of the Florida Bar. In October, he served as a guest judge in FIU’s College of Law Twelfth Annual Board of Advocates Intramural Appellate Advocacy Competition. Also, Barman’s article “Judge’s Compliment Backfires for Attorney” was published in the Daily Business Review on November 11, 2014.

Jonathan Milian, assistant professor, presented two research papers at the annual meeting of the American Accounting Association held in Atlanta, Georgia in August. The papers are entitled: “Overreacting to a History of Underreaction?” (sole-author) and “An Empirical Examination of Horizon: Evidence from the Term Structure of Implied Equity Volatilities” (co-author).

Manny Pravia (MST ’92), lecturer, has been appointed to serve a two-year term as member-at-large on the Florida Institute of Certified Public Accountants’ (FICPA) Committee on Nominations. Pravia’s term began July 1, 2014. Pravia was also named as a director of the Alpha Kappa Psi Foundation, joining a nine-member Board of Directors which guides the foundation’s activities.

Krishnamurthy Surysekar, associate professor, and Clark M. Wheatley, associate professor and faculty director of the Professional MBA Program, are two of the authors of a paper entitled “On the association between donor-imposed financial inflexibility and future donations to charitable organizations” which has been accepted for publication in Journal of Management Accounting Research, a premier journal. Also, Surysekar earned two recognitions from the Professional MBA Class of 2014 (Pines cohort): Best Professor and Best Course.

Karlene Cousins, associate professor, is co-author of “The Regulatory Issues Affecting Mobile Financial Systems: Promises, Challenges, and a Research Agenda” appearing in the June 2014 issue of Communications of the AIS (Association for Information Systems).

John Zdanowicz, professor, co-authored “The Limitations of Diversification Return” which appeared in the Summer 2014 issue of The Journal of Portfolio Management.

Also, he co-presented “The Impact of Trade-Based Money Laundering and Other Transfer-Pricing Violations on State Corporate Tax Receipts” at the Association for Budgeting and Financial Management Annual Conference held in Grand Rapids, Michigan, October 2-4, 2014.

Aya S. Chacar, associate professor and Ingersoll Rand International Business Professor, was elected to serve on the Executive Committee at the International Management (IM) Division at the Academy of Management, a division of more than 3,000 management faculty around the world. She started her five-years of service in August, 2014. Also, Chacar served as chair of the IM Division Junior Faculty Consortium on August 2, 2014 at the Academy of Management Annual Meeting in Philadelphia, Pennsylvania.

G. Ronald Gilbert, clinical professor, co-authored a paper, “Relational behavior of leaders: A comparison by vocational context” which appeared in the Journal of Leadership and Organizational Studies on August 24, 2014.

Two articles, each co-authored by department faculty, appeared in the June 2014 issue of the Academy of Management Journal: “It’s Not Fair … Or Is It? The Role of Justice and Leadership in Explaining Work Stressor–Job Performance Relationships” by Brooke Buckman, associate professor and “CEO Career Variety: Effects on Firm-Level Strategic and Social Novelty” by Nathan Hiller, associate professor and Knight Ridder Center Research Fellow. Also, Hiller spoke on the state of the science of leadership research and the FIU Center for Leadership at the South Florida Organizational Development Network on September 4, 2014.

Jerry Haar, professor, was quoted in “How Much Will Labor Unrest Affect Businesses in the Region?” concerning labor disputes in Latin America. The article appeared in the June 25, 2014 issue of Latin America Advisor. Haar was also quoted in “Labor strikes could cripple Brazil, executives say,” an article in the July 8, 2014 issue of Monitor Global Outlook, a global intelligence and research service of The Christian Science Monitor.

Samantha C. Paustian-Underdahl, assistant professor, co-authored the article “Getting to the COR: Understanding the role of resources in conservation of resources theory” which appeared in The Journal of Management on June 2, 2014. Her study titled: “The Work-Family Interface and Promotability: Boundary Integration as a Double Edged Sword” published in The Journal of Management, is being featured in a Business Review program available to all NPR and 200 other radio stations. Her study “Gender and Perceptions of Leadership Effectiveness: A Meta-analysis of Contextual Moderators” published in The Journal of Applied Psychology, and was discussed in a Forbes article by Sebastian Bailey entitled, “Who makes a better leader – a woman or a man?” which appeared July 23, 2014. Paustian-Underdahl also presented two research studies at the 2014 Academy of Management conference in Philadelphia, Pennsylvania, held in August: “Senior Executives’ Boundary Management and Work-Family Conflict: Do Organizational Supplies Matter?” and “Understanding When and Why the Queen Bee Effect Occurs in Organizations: A Cross-cultural Examination.”

An article co-authored by Seema Pissaris, professor, entitled “Powerful CEOs and employee relations: evidence from social corporate responsibility indicators” was published July 27, 2014 in the Journal of Economics and Finance.

Jonathan Hasford, assistant professor, was quoted in a Sun Sentinel article by Johnny Diaz entitled “Country music has a new radio station: ‘The Bull’ 93.5-FM” which appeared on July 25, 2014. Also, two articles Hasford co-authored have been published. “Emotional Ability Training and Mindful Eating” appeared July 23, 2014 in the Journal of Marketing Research by the American Marketing Association. “Emotional Ability and Nonverbal Communication” appeared in Psychology and Marketing on June 9, 2014.

Peter Magnusson, assistant professor, presented “An Examination of the Interplay between Corporate Social Responsibility, the Brand’s Home Country, and Consumer Global Identification” and “The Role of Country of Origin on the Multinationality-Performance Relationship” at the Academy of International Business Conference in Vancouver, BC in June, 2014. He also presented “Does the value of global brands apply to both foreign and domestic-based global brands” at the Consortium for International Marketing Research (CIMaR) in Victoria, BC. Magnusson has been recognized as one of three “Outstanding Reviewers” by the Journal of International Marketing.

Suzanne Hollander, visiting instructor, has been appointed by the Miami Beach City Commission to the City of Miami Beach’s Affordable Housing Advisory Board, Real Estate Professional Position for a term now through December, 2015.