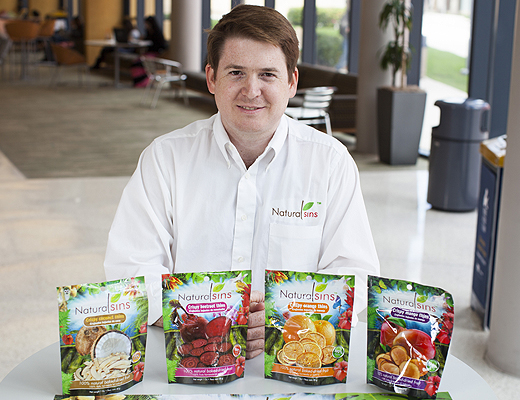 The quest to introduce a healthy snack product, Natural Sins, to U.S. consumers has proven a challenge for FIU’s College of Business alumni Andres Dominguez Dillon and his business partner Ivan Sosa Lazarenko. Two years of hard work is delivering the recognition that will help Natural Sins become a household name.

“This support makes it easier for us to knock on doors,” said Dominguez. “The recognition indicates that the HBIF believes in Natural Sins, and we hope that this will help others believe in us too.”

Dominguez and Sosa created Natural Sins in Costa Rica after Sosa’s mother developed baked-dried apple chips at her gourmet shop. Its success drove them to industrialize the process and sell them at mass market level.

The company launched in September 2011 and Natural Sins’ apple, mango and pineapple chips debuted at supermarkets in Costa Rica. By February 2012 the product was being sold in Panama and later in El Salvador, Guatemala and Nicaragua.

As he studied for his PMBA at FIU during Natural Sins’ early years, Dominguez turned his classes into opportunities to develop a business plan for the growing enterprise. Topics covered during the 18-month course, including finance, accounting and marketing, were immediately applied to the company’s operations.

“Every class helped us build a part of our business,” Dominguez added, pointing to professors including David Wernick, Dileep Rao and Galen Kroeck as mentors.

Today, Natural Sins – apple, pineapple, mango, oranges, coconut, and beets – is also sold in Florida, Illinois, Arizona and Texas as well as in Toronto and Japan.

Despite the initial success in Latin America, Natural Sins’ entry into the U.S. market has been hard fought, and Dominguez admits there’s still a lot of work to be done. “The U.S. food market is more complex and expensive than we ever imagined,” he added.

Natural Sins’ is focusing directly on consumers “so they will buy and eat the product and make it a business that starts making money” noted Dominguez, who is based in Miami. “Now we’re marketing and doing promotions to showcase Natural Sins to the consumer.”

Being a small company, access to financial capital didn’t come easily. Banks would not give Natural Sins a loan, so they needed to find investors.

In order to obtain the funds necessary to expand Natural Sins’ presence in the U.S., Dominguez turned to the SBDC at FIU, where he was connected with Ricardo Weisz, an international business expert and program mentor.

Weisz began working with Dominguez and Sosa in early 2014 and has helped them implement changes – including new sales and branding strategies plus a new packaging design – to make Natural Sins attractive to investors.

“When you start a business you think you know everything, but when you start working you realize that you don’t know all that is needed to be successful,” said Dominguez. “Through Ricardo’s guidance and support the SBDC is giving us the tools to make Natural Sins a viable and successful business.”

Dominguez recalled that following the La Idea win, a new distributor contacted him and Sosa, who is based in Costa Rica where Natural Sins is manufactured, about working together.

“Events like these allow us to move forward because the support helps find new opportunities and people that are willing to be part of the project, creating a more structured network that allows us to work in a more efficient way,” Dominguez said. “We can create the curriculum that we need to continue growing.”