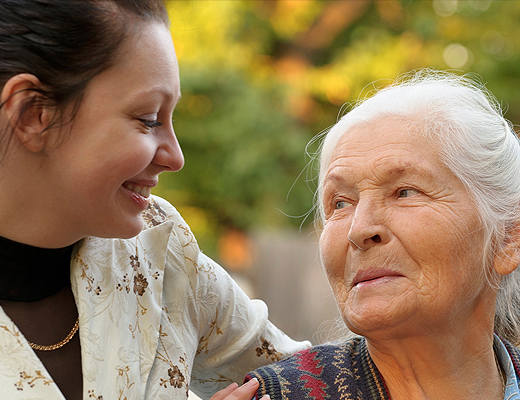 Presenting an affordable solution to the growing elder care crisis, Room2Care emerged a winner in this year’s Miami Herald Business Plan Challenge, co-sponsored by the College of Business’ Pino Global Entrepreneurship Center. The cost-sharing program, founded by an FIU student and a doctor, won first place in the annual contest’s FIU Track and was named Challenge Champion.

Created by Todd Florin and Richard Ashenoff, Room2Care is designed to connect those in need of long-term care with those who can provide cost-effective care options in the local community, offering seniors not only financial savings but also increased independence.

“We really wanted to create a business that helps people and makes a difference,” said Ashenoff, a College of Business student currently working on his Masters of Accounting degree.

Florin, a practicing doctor, described the situation as critical. “There’s no greater need than finding affordable care for seniors,” he said. “It’s a conversation that people need to have.”

The lineup of winners in the 2015 Miami Herald Business Plan Challenge covers a broad range of issues and trends. Wuelto, an online mall for Latin America, and Senzu Foods, an insect-based line of food products, took second and third place in the FIU Track.

The People’s Pick award in the FIU Track went to Court Buddy, a platform for affordable legal help, with 2,168 votes. Room2Care took second place and Wuelto came in third. Room2Care earned the Challenge Champion title due to the judges’ scoring and its high People’s Pick vote total.

“This win is going to help us build and grow Court Buddy,” said CEO James Jones Jr., an attorney who has been practicing in Florida for nearly a decade, and launched the company with his wife Kristina. “It’s going to bring more brand awareness and exposure.”

Passion and expertise keys to success.

The four FIU Track judges highlighted Ashenoff’s and Florin’s experience, passion and first-hand knowledge of the healthcare industry as influencers in Room2Care’s success. Ashenoff has spent his career in home- and community-based senior services, while Florin is a physician who has worked with seniors for 20 years.

Room2Care offers tailored services to seniors and to caregivers alike. Hosts are able to list a space in their homes to offer basic care and supervision for a fee. Seniors can then select which services they need and pay for each of them individually. They can also provide a room in their house to the caregiver free of cost.

Launched in December 2014, Room2Care generates revenue from both the products available on the “Care Commander” website as well as a percentage of the booking fees.

“My undergraduate degree in finance [from FIU] really laid the foundation for Room2Care because we’re essentially working with numbers – budgeting, forecasting and putting together financials – to make the business scalable,” said Ashenoff, who will graduate this summer. “You don’t really get that experience outside of school.”

In addition to providing affordable care, Room2Care is creating jobs for nurses, home health aides, certified nursing assistants, and other healthcare workers. “There aren’t enough jobs,” said Ashenoff. “With our model, nobody loses… we’re creating alternatives for people that have no options.”

Online legal matchmaking system Court Buddy, winner of the People’s Pick award, connects people and businesses with affordable attorneys based on their budget. These provide a-la-carte legal services such as drafting a single legal document, making a single court appearance, preparing single non-disclosure or partnership agreements for businesses, among other services.

“A person no longer has to stress over not knowing how much an attorney’s hourly rates will cost them or how to get the money for an attorney’s high retainer,” James said in a presentation before FIU Track judges.

On the flip side, Court Buddy offers attorneys who are trying to survive in an oversaturated legal market easier access to new clients. Court Buddy currently counts 25 attorney members, out of a total 50 members, and averages “eight to nine inquiries a day,” said James, who opened his own law firm in 2012.

Kristina, who obtained Bachelors and Masters Degrees in Advertising at FIU, noted that her academic experience has been key in developing and growing Court Buddy’s service offerings. “Developing a campaign requires a lot of market research and surveys,” she said. “It’s about identifying what people need and what they want, and building it.”

Court Buddy launched in South Florida in January 2015 and recently expanded its services to other parts of the state. A nationwide rollout is in the Jones’ long-term plans.

Winners and finalists agree that their participation in the Miami Herald Business Plan Challenge will grant their bootstrapped up-and-coming ventures much-needed brand recognition and networking opportunities.

Until now, the Jones’ efforts to promote Court Buddy have been focused on social media and the distribution of fliers at courthouses in their coverage areas offering free tips on topics such as making a court appearance or hiring an attorney. They are confident that their win in the Miami Herald Business Plan Challenge will broaden that footprint.

“Any time you have exposure of this magnitude it brings more eyeballs to the Court Buddy website and a larger audience begins to know and understand who and what we are,” said James. Added Kristina: “It also shows current customers that Court Buddy is something serious.”

Although Room2Care has a strong presence in social media, reaching seniors via that route has not been very effective. Florin and Ashenoff are now focusing their efforts on senior-focused organizations and religious groups and will soon begin direct mailings to seniors.

“We’re trying to do something very different and we need to get the word out and to be recognized by seniors. Anything that helps is good,” said Florin. “Winning [the Business Plan Challenge] is a validation, but it’s still only one step. We have a big staircase and we just need to keep putting one foot in front of the other.”