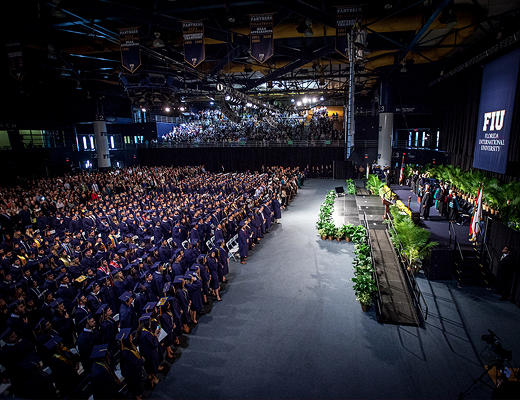 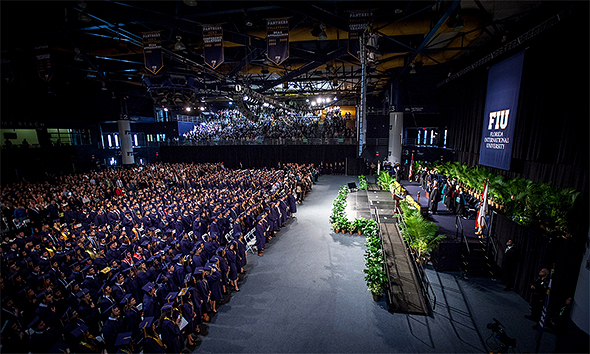 Once it’s earned, a college degree is forever, listed on every resume and always a part of a person’s legacy. At Spring 2015 Commencement ceremonies, 980 students in the College of Business at Florida International University (FIU) were awarded their degrees, marking a perpetual change in their list of accomplishments.

President Mark B. Rosenberg welcomed the graduates and their family and friends to two ceremonies held Sunday, May 3, 2015, at FIU Arena. Dean David R. Klock presented the diplomas to the business students.

At the afternoon commencement ceremony, 600 students from the R. Kirk Landon Undergraduate School of Business were recognized for earning a bachelor degree.

Shouts of joy, handshakes, tears, hugs and “high-fives” – and lots of photos – were part of each celebration, as graduates prepared to set forth on the next part of their journeys.

Since 2010, FIU has recognized students who exemplify the “Worlds Ahead” philosophy of the university. At the Spring 2015 Commencement, four students from the College of Business received Worlds Ahead recognition:

Litong Chen (BBA ’15) emigrated to the U.S. at age 13. She chose international business as a career so her Chinese background and knowledge of Mandarin could expand her opportunities. In spring 2012, Chen placed first at the regional level and third nationally in the Johnson & Johnson university case competition, leading her to a second major in finance. As president of Alpha Kappa Psi, she helped launch the FIU First Generation Scholarship Fund. Chen, part of the Honors College, is a teaching assistant in the Honors College Entrepreneurship, Design and Thinking course. She is joining Goldman Sachs’ New York office and also hopes someday to open her own business.

Gedma Estrada (BBA ’15) came to FIU, in large part, because of the quality of FIU’s chapter of the Future Business Leaders of America – Phi Beta Lambda (FBLA-PBL), an organization she was involved in during high school. While at FIU, Estrada held multiple leadership roles in the organization, including chapter president and Florida PBL state president. She led her chapter to third place in a national competition. A passion for viniculture drove Estrada, majoring in marketing, to also study hospitality management and participate in a study abroad program in Rioja, Spain. Following a summer internship, she received a position as a sales executive at C.H. Robinson in the firm’s Miami office.

John Marin (BBA ’15) was one of 125 students selected from 1,000 applicants for a summer program at Goldman Sachs in New York. His resume caught the eye of the late R. Kirk Landon, who mentored him. Marin also drew the attention of J.P. Morgan, which offered him a summer internship and later named him the firm’s first Campus Ambassador at FIU. Marin served as Mr. FIU Business and, as president of the Phoenician fund, led highly successful workshops that helped 22 FIU students break into Wall Street. After graduating with his degree in finance, John will become an analyst in the Corporate & Investment Bank at J.P. Morgan in New York City.

Ruth Rios (MBA ‘15, BS ’10) was separated at age 10 from her parents, after a relative provided misinformation. She was in foster care until age 18, in 14 different foster homes. Rios came to FIU while still in foster care and was an early supporter of Fostering Panther Pride, which provides help for former foster care and homeless students. A scholarship student, Rios earned her bachelor’s degree, and then an MBA as part of the Professional MBA Downtown program. She worked as an account manager for CHARLEE of Dade County, a nonprofit agency. Rios is currently senior manager of Donor Relations at the Sylvester Comprehensive Cancer Center and plans on earning a second master’s degree in public administration.

Mohammad Reza Afjei (PhD ’15) who received a doctorate in Business Administration has been a graduate assistant in the Department of Management and International Business.

Ariana M. Arguello (BBA ’15) received her undergraduate degree in finance. She is a student assistant in the Executive Management Development, Deans Office. She will attend FIU College of Law.

Vanessa Garcia (BA ’15), a student assistant in the Department of Marketing, received her bachelor’s degree in sociology. She is in the process of applying to multiple public health graduate programs within the state of Florida.

Jennifer Gonzalez (BS ’15) received her bachelor’s degree in political science. She is a student assistant in the School of Accounting and will be attending law school.

Jessica Mari (JD ’14, BA ’10), an administrative coordinator in the PhD Program for the College of Business, was at the College of Law’s annual awarding of degrees, held at the Spring commencement, to accept her Juris Doctorate she earned in December.

Andrea Lacayo (BS ’15) received her bachelor’s degree in hospitality management. She is a special events coordinator in the Office of Advancement.

Manuel Munoz-Repiso (MS ’15, BS ’11) received his master’s of science degree in higher education. He is an administrative assistant in the Office of the CFO and Senior VP for Finance & Administration.

Leisy Ponce (MBA ’15, BA ’10), an administrative coordinator in the School of Accounting, earned a second degree from FIU, her MBA.

Yasemin Shirazi (BA ’15), a student assistant in the Department of Management and International Business, received her bachelor’s degree in psychology. She will be continuing her education in industrial/organizational psychology at New York University.

Leticia Vargas (BS ’15), a student assistant in the School of Accounting, received her bachelor’s degree in criminal justice. She has accepted a job as a clerkship coordinator in the Herbert Wertheim College of Medicine at FIU.

Alexandra Vassiliou (BA ’15), a student assistant in the Department of Marketing, received her bachelor’s degree in English. She is interviewing for a position with The Walt Disney Company. 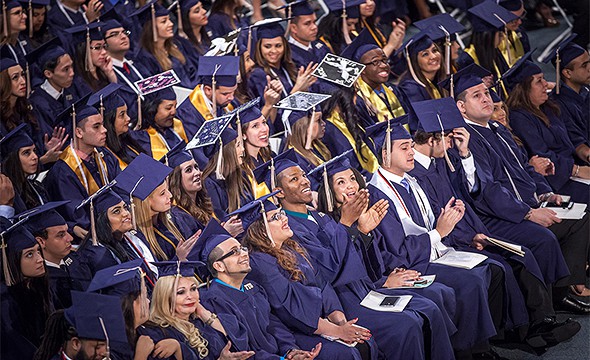