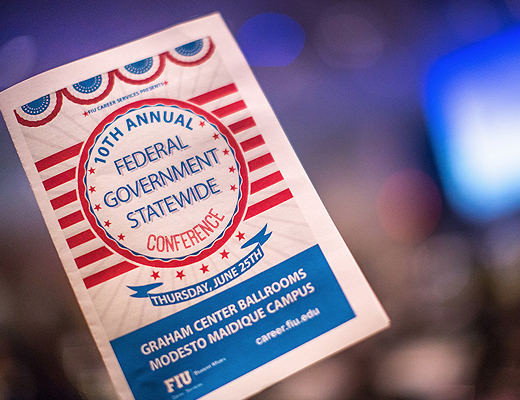 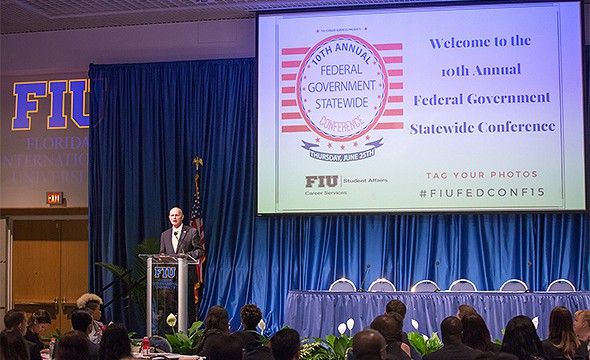 The largest employer in the U.S., the federal government, met with FIU and College of Business students to showcase the employment opportunities, internships and scholarships available across its multiple agencies.

In his keynote speech, Frederick Pfaeffle Arana, deputy assistant secretary for civil rights at the USDA, highlighted the importance of confidence, perseverance and of following one’s passions.

“There’s a need for talent to come into these agencies,” said Pfaeffle, an FIU alumnus (BA ‘84). “It’s amazing what you can contribute to the federal government.”

“The quality that most resonates about our students is determination to succeed,” FIU president Mark Rosenberg said in his opening remarks. “They don’t come from a world of privilege, they come from the world we all live in and they understand the value of work.”

Addressing the 500-plus students who filled the room, Rosenberg added: “There isn’t a discipline or an area where the federal government doesn’t have an option for you.”

A changing landscape is driving the need for new blood at the USDA, which has 100,000 employees in 88 countries.

“One challenge is the average age of farmers, they’re aging and little new farming energy is coming in,” said Pfaeffle, who joined the USDA in 2010. “There’s also the increased sophistication of jobs in technical areas.”

Pfaeffle recalled that his first job was at Burger King on Coral Way and 87th Ave. followed by stints at construction sites and restaurants – as busboy, waiter and bartender.

Upon graduating FIU, Pfaeffle became an attorney. His first venture in public service was as principal deputy county counsel at the Office of the Los Angeles County Counsel. And he was hooked.

“I tried public service and am completely addicted,” said Pfaeffle, whose first job at the USDA was as deputy assistant secretary for civil rights.

His advice to students? “Don’t give up on your dreams. You’re going to face huge challenges and you need to have confidence in your knowledge and your skills.”