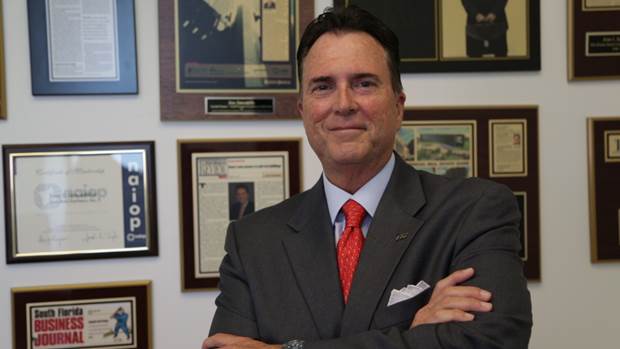 Entrepreneurship and passion have been key to Jose Juncadella’s success. The founder of commercial real estate firm Fairchild Partners will receive the Entrepreneurship Award at FIU College of Business’ 2015 Hall of Fame.

A veteran of the South Florida real estate market, Juncadella launched Fairchild Partners in 2005. Times were challenging, he recalled, and hard hit by the intensifying recession, yet Fairchild thrived and has remained privately owned ten years later.

Fairchild has represented companies such as Facebook, Anheuser-Busch, Feeding South Florida and Baptist Health South Florida, as well as exclusively handling developments like Downtown Doral and Centergate at Gratigny.

He has been active in several industry organizations, currently serving as the 2016 President of the Commercial Industrial Association of South Florida (CIASF) and past president of Realtors Commercial Alliance (RCA) in 2009. Juncadella is a member of the Society of Industrial and Office Realtors (SIOR).

Juncadella (BBA ’81) graduated from FIU with a double major in management and real estate. With more than thirty years of commercial real estate brokerage experience, he’s delivered over $2.5 billion in sales and leasing volume. Prior to founding Fairchild Partners, Juncadella was the top-producing broker with Codina Real Estate Services for sixteen years, and with The Doran Jason Group for five years.

“FIU made me a success,” said Juncadella. “It was there that fell in love with real estate. FIU gave me that passion for business [and] marketing.”

The Hall of Fame inductees share a common denominator: their first steps into the business world, the ones that put them on the road to success, were taken at FIU and the College of Business.

They’re honored for having achieved distinction as founders and builders of new business enterprises as well as those who have distinguished themselves at the local, national or global level.

The 2015 inductees will be recognized at the College of Business’ signature event, the Hall of Fame Awards Ceremony, on October 29.

In his own words: