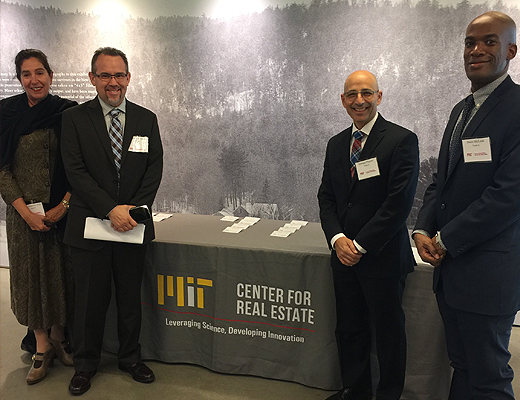 Skilled analysis, creativity and intense work propelled students in FIU’s Hollo School of Real Estate to the semi-final round of MIT’s rigorous CASE Competition. Advancing to the semi-finals alongside Columbia, Cornell, Harvard, Yale, Georgetown, MIT, UCLA and other prestigious universities, FIU was named one of the top 12 teams, a first for the Master of Science in International Real Estate (MSIRE) program.

During the first round of the competition, four MSIRE students competed with 31 teams from universities across U.S. to deliver a proposed development project complete with market analysis, site plan programming, design, and deal structuring… all in five days. The 2016 assignment: a nine-acre site located in the middle of Biscayne Bay.

The competition required each of the teams to develop a nine-acre tract of land located in the southwest corner of Dodge Island, within the Port of Miami, that Miami-Dade County Commissioners are looking to redevelop.

“Ours was to create a high profile project as Miami is trying to get into the 21st century,” said Julie Petrella Arch, who led the four-person MISRE team. “It was particularly challenging because we had a true development project.”

In addition to Petrella, a commercial real estate appraiser, the MSIRE team included Francisco Perez, an architect; Duen McLean II, a real estate development consultant; and Enrique Piñeiro, a realtor. Each brought to the team different skills that when combined made it possible to develop the $1.5 billion project.

“The hardest part was figuring out how it all comes together – finances, project’s needs and uses, shareholder’s interests – plus putting the concept and visuals on paper,” said McLean.

“Team Six,” as the FIU team was identified in the competition, submitted a sophisticated project that included uniting two tracts of land, relocating the property’s existing tenant, demolishing a building and parking lot, and designing a multi-purpose master plan to create “Bayport Plaza.”

The new site would include a maritime museum, hotel, residential apartments, workforce housing for port employees, office and meeting space, and retail outlets. Among the other features: a 150-foot setback to allow for rising sea levels plus alternative power sources including solar, wind and LEED platinum certification.

“It wasn’t just an office building; there were different income streams and costs that we had to consider,” Petrella said. “It was very cumbersome, yet at the same time fun.”

Discipline and strategy were key.

Now in its fifth year, the CASE Competition mimics the professional circumstances and assignments that students in real estate finance, acquisitions and development are likely to encounter after graduation. It’s organized by the Alumni Association of MIT’s Center for Real Estate. This year was MSIRE’s fourth in the CASE Competition.

“For a very young program, we made significant improvements that showed the quality of our students and the strength of our program,” Zhonghua Wu, associate professor of real estate, who served as advisor for FIU’s 2016 team. “The advantage of our team was that we had a broad base of knowledge and skill sets.”

Hollo School director William Hardin and Assistant Professor Eli Beracha, who both served as pre-competition team advisors, noted that the students’ advancement to the semi-final round reflects the excellence of the MSIRE program. The faculty members and students agreed that the most valuable aspect of participating was incorporating their combined knowledge with intense discipline.

“It was an arduous process because all of us work and attend classes; we had to be very judicious with our time,” said Petrella. “Being able to implement the different things we’ve learned and building something from an idea through design, cash-flow and development was very rewarding.”

Each of the 12 teams in the semi-final round made a 15-minute oral presentation defending their assumptions before four judges in Boston. Three teams advanced to the final round.

Perez recalled that following the presentation, one of the judges, who heads a real estate investment trust (REIT) praised the team’s work. “He said his own team couldn’t have done better that we had,” Perez noted. “We did a lot of strategizing and everything fell into place early.”

“The best real estate minds in the U.S. and the world competed,” said Petrella. “It was a great experience. We learned a lot on how we can get better at this competition and now we can all sit down and strategize about it.”