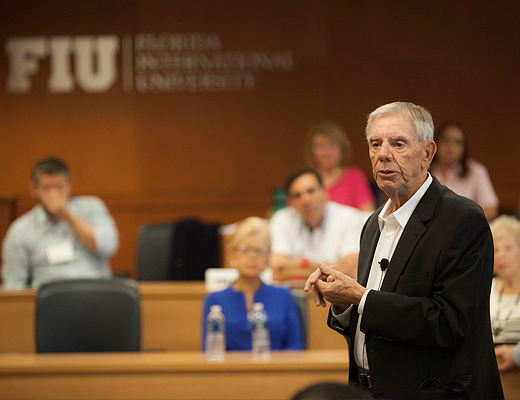 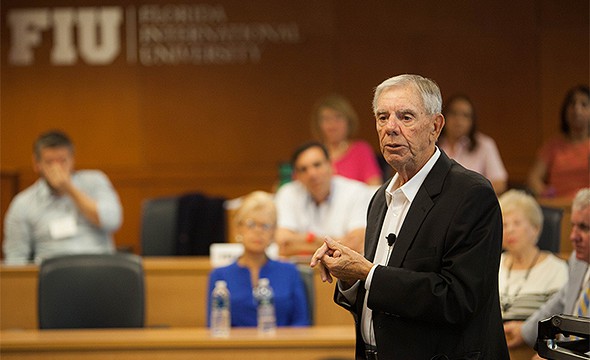 Kerstin Sachl’s BA in languages and extensive public relations expertise helped take the German native to scores of countries as the top in-house PR executive at Porsche Latin America and Bentley Motors Europe. Still, her trip to South Africa, part of the Executive MBA program at FIU’s College of Business, brought her a brand new perspective by giving her a first-hand look: understanding the nuts and bolts of international entrepreneurship in an emerging country.

As part of a team of MBA students from universities throughout the world, “We went into townships, and visited the entrepreneurs who founded businesses in these townships to address various needs,” she said, adding they worked with a company called Department of Coffee. “It was inspiring to see how these entrepreneurs succeed, against all odds, and improve life for their families and communities. And we, as a group, had the privilege to give recommendations and feedback to help them become even more successful.”

Sachl, who now has her own PR firm focused on the luxury segment, joined three other soon-to-graduate EMBA students to share their experiences at a panel discussion, held at FIU Downtown on Brickell on March 9, 2016. Speakers also included Richard Crusan, the executive officer for US Southern Command’s Public Affairs Office; Liria Litano, manager of retail planning at Perry Ellis International, and John Farias, a division manager for DHI Mortgage. The panel was moderated by Walfried Lassar, associate dean for the Chapman Graduate School of Business.

All four are accomplished professionals. Still, they decided to take on the challenge — and earn the rewards — of pursing an Executive MBA. In doing so, they explained, they joined a unique program, whose professors integrate real-world business experience with theory, using a method that teaches practical information in concert with leadership and decision-making skills.

“At first I wasn’t convinced I needed the program, as I had achieved some level of success in the business world,” Farias said. But, he added, undertaking the EMBA was one of his best decisions. “It’s not textbook, it’s practical. You start to see things from an entrepreneurial perspective,” he said.

Others echoed that view. “It’s about putting yourself in place of the entire organization,” said Sachl; figuring out how to set goals and help others achieve those goals. “You stop looking at what the industry is, and look at how it is functioning – and ask, ‘how do the departments work together?’ ”

All agreed that learning to craft and give presentations was central to their growth.

“In the first week of residency you have a presentation class,” Litano said, adding that the professor critiques video-taped performances, a process that continues throughout the program. 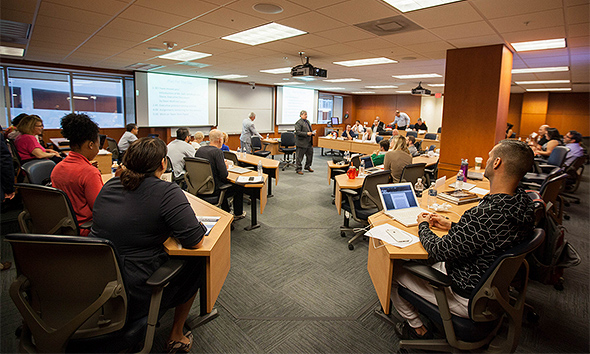 Pulling as a team.

Still, no one sugar-coated the program’s challenges.

“Sometimes you don’t sleep much, but I’ve already done things I never thought I could do,” said Crusan.

Panelists underscored how the program’s module approach, which centers around themes rather than functional course topics, facilitates internalizing the skills needed in today’s business world.

For example, the first semester theme was “navigating in a global world.” The international law, business, and accounting professors were in the lecture hall at the same time, discussing topics in an integrated manner. “It helps you get to a top-level understanding and CEO approach,” Sachl said. There is also a leadership component, added Farias, “that stresses the importance of people. I learned to make changes with employees, and as a result, my career has been a lot more harmonious.”

What really left the crowd breathless was discussion of the EMBA Consortium, the one-week international residency that sends students to top business schools around the world, giving them the opportunity to work with colleagues from dozens of other countries on real-world problems.

In addition to Sachl’s experience in South Africa, Litano went to London, Farias to Italy, and Crusan to Chongqing, China, where the study centered on improving the efficiency of a computer maker. “We had to figure out where the bottle neck was,” he said. Each of them emerged from the experience with a set of new business connections based throughout the world, and a network they hope to continue to tap as they progress in their careers.

Asked to name one thing that stands out from their experience, the panelists noted they gained confidence by meeting difficult challenges, and acquired analytic skills. But friendships made and camaraderie experienced with classmates stood out overall.

“All 29 of us bring knowledge,” Litano said. “It’s not who is best, it’s how can we work together. Everyone puts their best foot forward. That is what I learned from this program.” 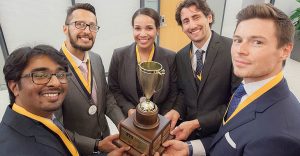