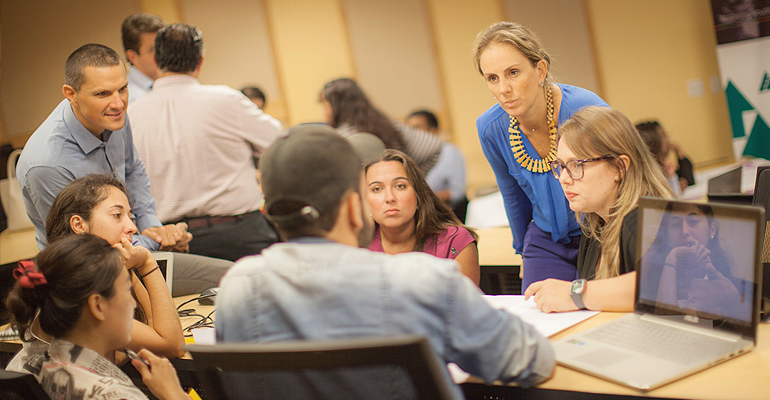 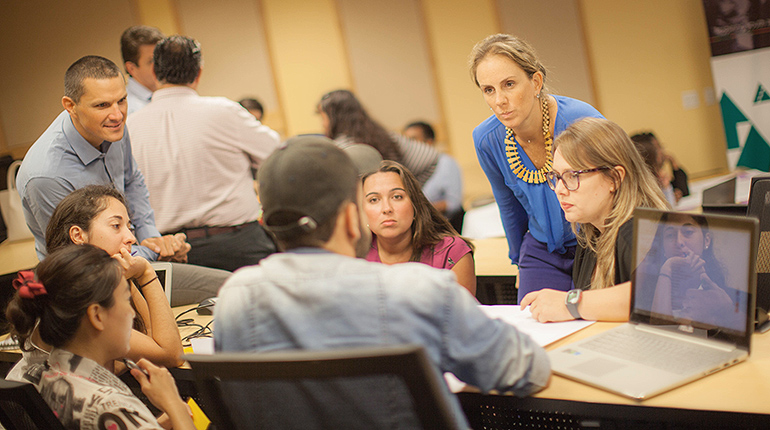 It’s not often that the public, private and non-profit sectors come together to advance an initiative. Similarly, it is not often that students from different academic disciplines team up to take on a social challenge.

But that is exactly what happened at Florida International University on May 4, when the College of Business, Junior Achievement (JA) Americas and the Miami-based software company SAP joined up for the first JA Innovation Camp 2016 in South Florida, held on the Modesto A. Maidique Campus. Engineering students, those studying accounting, hospitality majors and others from across FIU schools and colleges all came together, said Carlos M. Parra, who serves as clinical professor in the Information Systems and Business Analytics Department and in the Marketing Department. The purpose: to “find innovative business solutions to a social problem using technology,” he said.

JA Americas’ president, Leo Martellotto, knew Parra from his time at Citibank, where he served as head of Community Development in Latin America. JA Americas reached out to Parra to make the innovation camp part of their first co creating meeting with SAP, held this year in Miami.

The aim, said Parra, was to give students a hands-on experience, and for JA and SAP, which sponsor camps throughout Latin America, to see how U.S. students take on the challenge in the morning-long pilot project. The group seeks to replicate the initiative in other parts of Latin America, including Brazil, Mexico, Colombia and Peru, as well as in Canada and the Caribbean.

“FIU is one of the largest universities in the state, and FIU believes in entrepreneurial education as a way to inspire youth,” said Hernan Zocco, a spokesman for JA Americas. It’s not the first collaboration between the organization and FIU, he said, adding that last year, the group organized its first Partners´ Cocktail at FIU Downtown on Brickell, in which FIU Trustee Gerald Grant (a JA trainee) participated. 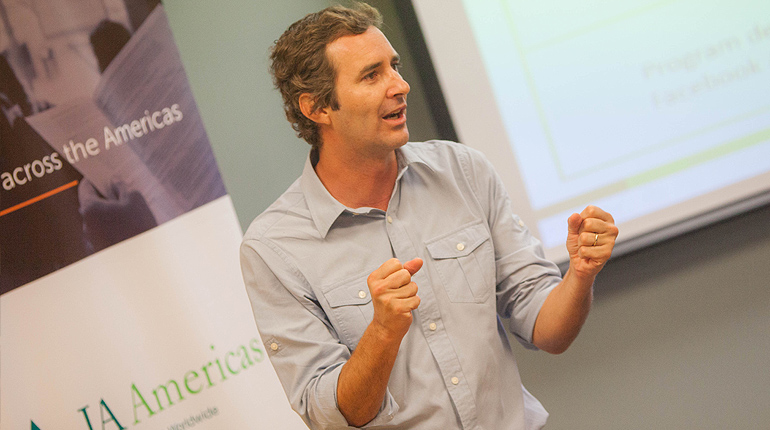 Students take on the challenge.

Even though it was late in the semester and during exam week, 15 students came to the morning event. Four multidisciplinary teams were formed. On the winning team: Camila Ceballos, international business and supply chain management major, Samer Saad, a mechanical engineering student, and Qianran Dai, hospitality and tourism management major.

“JA innovation camp was an amazing experience,” Ceballos said. “I was a bit scared because I had never done an event like it and I didn’t know anyone — but I loved that they made the groups multidisciplinary and mine was even multicultural. My team members were Chinese and Egyptian, and I’m Argentinean, so that was super cool.”

Their winning app idea is designed to work with cell phone messenger services and relays a “driving” alert when the person being called or texted is behind the wheel. The driver could then return the call or text later, relieved from the anxiety of immediately answering the caller – be they boss, child or spouse.

“We had a consensus on our topic, the text and driving issue. This is a very specific and clear topic, and it also drives big trouble,” said Dai, who said they worked like it was something they would actually bring to market. “The result was a big surprise, since we know every other team is also very creative.”

Saad has long been interested in using technology to solve social issues. “We wanted a creative solution for texting and driving that is both simple and would merge with a user’s lifestyle without forcing anything on them,” he said. “Out of this experience I learned that combining minds can result in something much more dynamic than what a single mind can solely achieve.”

Winning team members got iPads. And SAP offered a paid internship to one of the event’s participating students.

The organizers learned something too. “The students did a great job during the challenge,” said Zocco. “Though they had just two hours to create a solution, they came up with creative and sustainable ideas. They truly represent the entrepreneurial spirit that we try to transmit.”