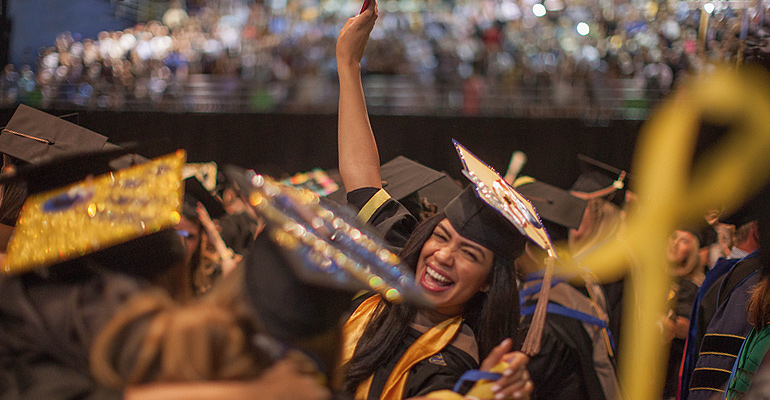 They overcame challenges, started business, and helped build communities. Some combined jobs and classes with raising a family and community service. And as they graduate from the College of Business, they look to a bright future.

These six students were named Worlds Ahead graduates for Summer 2016. Each was recognized by FIU President Mark B. Rosenberg at Summer 2016 Commencement, held August 9, 2016. Established in 2010, FIU’s Worlds Ahead recognition goes to individuals with strong leadership qualities, a desire to change lives and a record of academic achievement.

Garcia’s parents — mom from Peru, dad from Cuba –- dropped out of college to each work two jobs to provide for their family. Garcia took advantage of the chance to go to FIU and is the first generation of her family to be graduated.

With a former co-worker at a medical office, Garcia has developed a new business called “We Have You Covered,” a mobile lab which travels to patients’ homes to provide lab services.

This enterprising student, graduating with a 3.62 GPA and majoring in international business, had a paid internship with Propulsions Technologies International, where she worked with a business leader who oversees four divisions of the company.

Garcia will begin work on her Master of Accounting degree at FIU in the spring, and wants to become a CPA.

Milena Lizarazo earned a degree at Universidad de La Sabana in Colombia and relocated to New York to work in finance.

Fifteen years later, she visited Miami Beach and heard about a group of condo owners unhappy with their management company. Since she wanted to move here to earn a Florida Real Estate Sales Associate license, Lizarazo drew up a plan and sent a copy to every owner. They hired Lizarazo, and she parlayed that success into her own company, which she ran while earning her MBA at FIU. Lizarazo saw her horizons expand when she took an organization information systems class with Associate College of Business Dean Susan Clemmons.

Lizarazo is focusing on expanding her real estate business that provides management expertise and a hotel rental program. It has 100 rental properties on South Beach.

Growing up, Orestes Mirabal faced domestic abuse, violence and illegal activities. He dropped out of high school and joined a Miami street gang.

After a Christian Ministry mentor set Mirabal on the right path as a young adult, he took on opportunities to give back, as a mentor in Miami and a worker in a poor Ecuadorian village. He became a warehouse laborer at UPS and over the next 15 years, rose to regional supervisor for business development and started a family.

A mentor at UPS introduced Mirabal to FIU’s Executive MBA, where his leadership, research and team building skills blossomed. His capstone project, “Real Walk,” is a non-profit mentoring organization which he hopes to turn it into a working agency. He mentors for Take Stock for Children, and plans to earn his doctorate in education.

In the 1990s, he flew several missions with Brothers to the Rescue, volunteers who helped secure the safety of Cuban rafters.

At FIU, Pineiro earned his undergraduate business degree and serves on the board of the Alumni Association.  A recipient of the FIU Malcolm Butters Scholarship Award as he worked for his MSIRE, Pineiro is the director of The Allen Morris Company.

As a teenager, Sonia Ortega worked during the summers at the accounting firm her grandfather founded in the Dominican Republic. In 2014 she became a trainee in the human resources department and later moved on to the consulting practice.

Her strong grades in the undergraduate international business dual degree program at the Universidad Iberoamericana (UNIBE), a collaboration between FIU and UNIBE and FIU, soon brought her to FIU. As a FIU international student ambassador, Ortega mentored business students from Denmark, Peru, Brazil and Great Britain.

In fall 2015, she received a merit scholarship for her academic performance in the dual degree program.

Ortega plans to earn a Master of Science in Financial Economics (MSFE) and eventually return to the Dominican Republic to become a partner in the family’s accounting firm.

When Yingyao Wu arrived on FIU’s campus as a transfer student, he had poor command of the English language but was determined to do what it takes to not only conquer the English language, but also to excel. He tape-recorded his classes, read textbooks two or three times, and asked questions of his professors, all to understand the material and strengthen his English.

With his family far away, Wu faced these challenges alone yet he achieved success after success, including earning an A in calculus and other tough courses.

Wu is graduating with a 3.45 GPA. He credits advisor Genesis Dieguez for being a valuable mentor. He plans to work for a year then return to FIU to earn his Master of Science in International Real Estate.