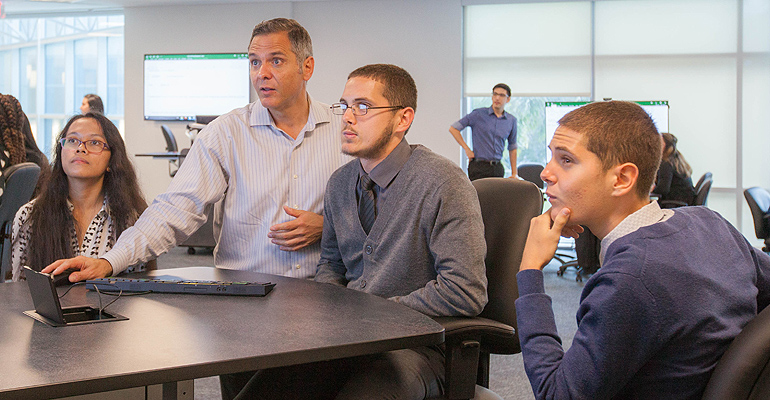 Assistant Professor Hemang Subramanian’s paper titled “Decentralized blockchain based marketplaces” which has been accepted for publication in Communications of the ACM.

Gomez, along with Associate Professor Kimberly Taylor and former faculty member Cecilia Alvarez authored a paper titled “The effects of Hispanic bilinguals language use and stereotype activation on negotiations outcomes,” published in the March issue of the Journal of Business Research.

Associate Dean Sumit Kundu was quoted in a story titled “Going Global: Why Startups Shouldn’t Shy Away From International Expansion,” in Business News Daily, which ran on January 27.

Modesto A. Maidique, Alvah H. Chapman, Jr. Eminent Scholar Chair in Leadership, was quoted in an article in the Miami Herald, “Miami Dade paying $350,000 to send top administrators to FIU leadership course,” that appeared in the Miami Herald on March 1, 2017.

Juan I. Sanchez, Knight Ridder Byron Harless Eminent Scholar Chair in Management, participated in the annual meeting of the U.S. State Department Board of Examiners of the Foreign Civil Service, held in Washington, D.C. on February 24, in his capacity as a board member. Sanchez also sat on an expert panel charged with developing a competency model for occupations involving infant/toddler caregivers, assembled by the U.S. Department of Health and Human Services, Office of Planning Research and Evaluation, held in Washington, D.C., on January 4th.

Sanchez also coauthored a paper titled “Measurement Invariance of the Satisfaction with Life Scale Across 26 Countries,” accepted for publication by the Journal of Cross-Cultural Psychology. In addition, he co-authored “Getting the global band together: Best practices in organizing and managing international research teams,” which has been accepted for publication in Handbook of the Global Work-family Interface, published by Cambridge University Press.

Sanchez was interviewed in a Cindy Krischer Goodman column titled “Job burnout? How to recognize it, how to cure it and how to avoid it,” which appeared in the Miami Herald January 30, 2017.

“The Role of Economic Development and Perceived Growth Opportunities in Employee Reactions to Mergers and Acquisitions: A Study of the Merger Syndrome Across 29 Countries” Sanchez, which was co-authored by Sanchez and Samantha Pautian-Underdahl, assistant professor, Stav Fainshmidt, assistant professor, and graduate teaching assistants Everlyne Misati, Yue Zhao and Haoran Zheng was accepted for publication in Group & Organization Management.

Assistant Professor and MSIRE Faculty Director Eli Beracha co-authored a paper titled “The 4% rule: Does real estate make a difference?” that was accepted for publication by the Journal of Property Research.

In a story that ran on January 2, 2017 titled “Luxury Apartment Boom Looks Set to Fizzle in 2017,” in The Wall Street Journal quoted a national index that tracks real estate, which is co-produced by faculty members of Florida Atlantic University and Florida International University.