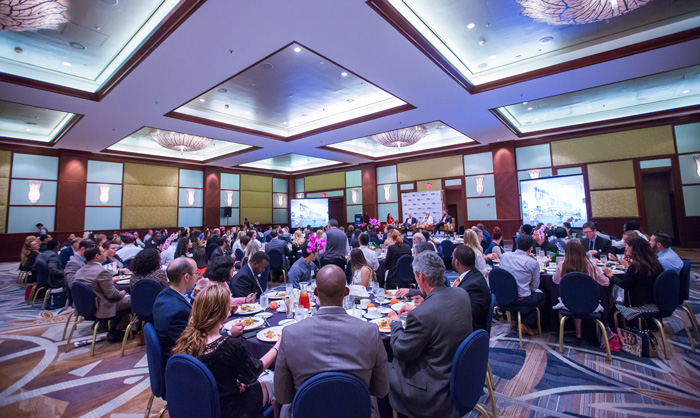 This summer, BizNews will present highlights of College of Business events held throughout the year.

Terranova’s success is a testament to the work ethic and vision of Miami native Bittel, who started the company in 1980. Using his personal story as an example, Bittel shared how long hours, hard work and determination took him to big places. During his second year in law school, he started Terranova, now with more than one million square feet under management.

Bittel was welcomed to the Developers Luncheon by William Hardin III, director of the Hollo School of Real Estate, who introduced him to a crowd of nearly 200 guests. The College of Business was honored that Bittel agreed to speak, said Suzanne Hollander, a real estate attorney and broker who teaches at the Hollo School of Real Estate moderates the developer luncheons and invited Bittel, Mindy McIlroy and Josh Gelfman, members of Terranova’s leadership team to share their insights and meet FIU students and alumni.

“It is inspiring for our students to have access to meet Stephen because he stands out as a role model for his professional success, innovation and hard work combined with his longstanding dedication to community through taking leadership roles in charitable and political causes,” Hollander said. “Stephen encouraged our students to not only work hard at their jobs, but also to be leaders in their local communities.”

Shifting investments to the urban core.

The company has made its mark in some of South Florida’s most iconic areas, managing 35 percent of commercial real estate on Coral Gables’ Miracle Mile and 25 percent on Lincoln Road. Over the last decade, Terranova has begun looking less toward the suburbs, eyeing instead the booming inner corridors.

“We did it because the suburbs were being built out, and the young folks are going urban,” said Terranova Director of Development Josh Gelfman, who also spoke at the lunch. They are hunting the “high street” local, he said, “the places where people gather and watch the world go by.”

Bittel shared that this was the thinking behind their decision to create the food hall, to be called the Lincoln Eatery, on Lincoln Lane, just north of Lincoln Road. The property, which will open next year, features a Marshalls store, now opened on the upper floor. Tenants have yet to be announced.

“We have never done a food hall build-out, and we are learning as we go,” said Mindy McIlroy, Terranova executive vice president, who also spoke at the luncheon. She said that all congenial gathering places have one thing in common: A focus on food as part of the attraction.

When it comes to choosing a place to start a career, Bittel had some practical advice.

“Look for a company doing good things that treats people well,” Bittel told his audience. What’s more, he said, the key to a well-functioning business is keeping your teams engaged and excited.

And, he said, crazy working hours are his norm. “Balance is not a lifestyle,” he said. He believes in a laser-like focus until a thriving business is putting money in the bank. Then, he said, one can have a very nice lifestyle.

While encouraging students to seek real estate careers, Bittel noted that it takes a certain kind of person to find happiness in commercial real estate. “You are retiring debt cycle after cycle – which means that to be a real estate developer, you have to be a highly optimistic person.  You must believe that, between when the project begins and when it is completed, the world will be the same. That is a giant leap of faith.”

Bittel also commented that FIU offers an incredible opportunity for students to improve their lives, and is a core contributor to the health, vitality and fabric of the South Florida economy.