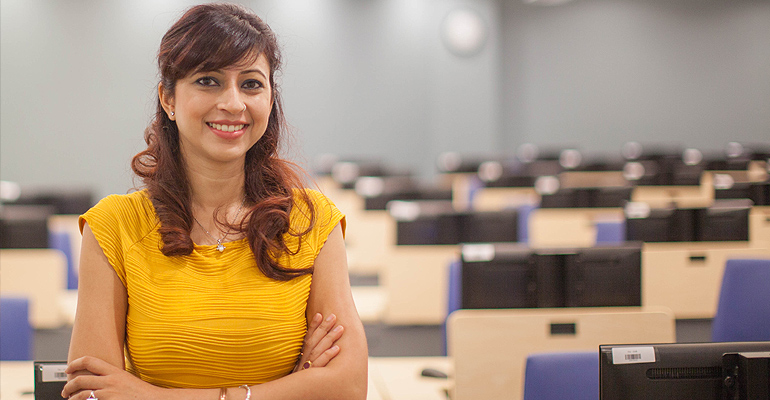 For Ina Thakur, moving from Shimla, India, to Miami to pursue her Master of Science in Information Systems at FIU’s College of Business meant leaving home and family. But she was ready.

“I wanted to take a little risk,” said Thakur, who, as she moved through the program and came to know the region, decided to make South Florida her new home. And now she has  grasped another opportunity: moving to Seattle to begin working as a business analyst for Amazon, who chose her from a select group of applicants for the position. Amazon will also sponsor her work visa.

“The fact is, it’s a world-leading company in ecommerce,” she said, noting that the amount and sophistication of its data and its enormous customer base were a tremendous draw.

She credits FIU’s Information Systems and Business Analytics Department (ISBA) for preparing her for the opportunity. “I found the faculty very warm and forthcoming, and very helpful from day one,” Thakur said. What’s more the program was well structured, she said, and helped students combine an understanding of business acumen with technology.

A path to Florida.

Thakur studied biotechnology during her undergraduate days in India. Yet she was also drawn to technology and eventually added computer science studies to her curriculum. After graduation, she worked for four years in India in IT at Tata Consultancy Services, where she focused on business analysis. Meanwhile she was becoming intrigued by analytics. As she evaluated graduate programs, FIU stood out both for its rigor and because it could be completed within 16 months or less.

She said Gladys Simpson, an instructor and faculty advisor in the ISBA department, stands out as a guide and mentor. “Meeting her was one of the best opportunities of my life,” Thakur said.

Simpson, for whom Thakur was a graduate teaching assistant, has high praise for Thakur as well. “She consistently went above and beyond her required duties and was always willing to embrace new opportunities with enthusiasm and a commitment to excellence,” said Simpson. “I have had many teaching assistants over the course of my six years at FIU, and she stands out as one of the best because of her positive attitude, initiative and the way she could command the respect of students.”

Thakur made her own opportunities as well.

“I did a lot of competitions, joined the AIS (Association for Information Systems student organization) club and had the opportunity to go beyond school,” she said. That included being part of the team named the U.S. winner of the Santander NEO’s Challenge, an international university data analysis competition that sent FIU students to Madrid for the finals.

Meanwhile, Thakur secured an internship at Univision, which turned into a job as a business intelligence analyst. “They were the best people, the best team,” she said, noting that her superiors encouraged her ambitions, even it if meant leaving the company and South Florida.

And now, as she looks forward to a career beyond the Sunshine State, she takes with her cherished memories of FIU. “There has not been a single class I didn’t enjoy,” she said. “It was absolutely fabulous.”