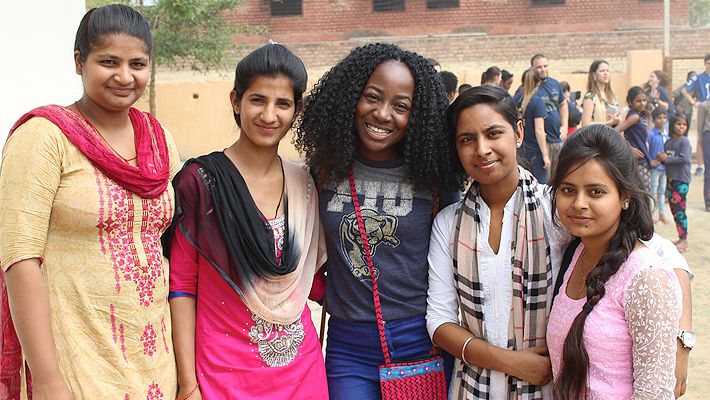 They left for Spring Break with suitcases stuffed with kids’ clothing, notebooks and first aid supplies.

They returned with fashionable tote bags – dozens and dozens of tote bags.

But this was no Spring Break shopping spree. The tote bags – as well as purses, makeup bags, and yoga bags – were carried back by students on an FIU Business Alternative Spring Break project. The products were stitched by the women of Bandhwari, a remote, impoverished village in India, with the proceeds from the sales going back to the village to support local economic development and women’s empowerment.

What’s more, the purpose-driven project united FIU undergraduates and graduate students across multiple colleges and disciplines, who contributed their knowledge, skills, and talents to help build the budding social enterprise.

The trip was initiated by Professor David Wernick, faculty advisor of the International Business Honor Society (IBHS), who began taking students to Bandhwari three years ago as a way for them to apply their international business skills in a real world setting.

Bandwhari is a village on the outskirts of New Delhi with a population of several thousand people, almost all of them living in poverty. The nearest bus stop is 4 kilometers away. Sanitary conditions are poor. Its small schoolhouse has few full-time teachers, and students attend primarily to get a meal, often their only one of the day.

Wernick had visited Bandhwari in 2012 as part of a professional development program organized by FIU’s Center for International Business Education Research (CIBER), and images of the village and its disheveled yet bright-eyed children had become seared into his memory. When the opportunity arose to lead a group of FIU students on an international service trip, he suggested Bandhwari.

IBHS students developed a plan to design handcrafted items made from India’s rich textiles that could be sold on campus and in local shops and boutiques. During the first year of the IBHS trip, students worked with local women to design a “pouf,” a household item that’s similar to a hassock. For the second year’s trip, with 10 students participating, the group switched to tote bags, an easier product to ship and sell. 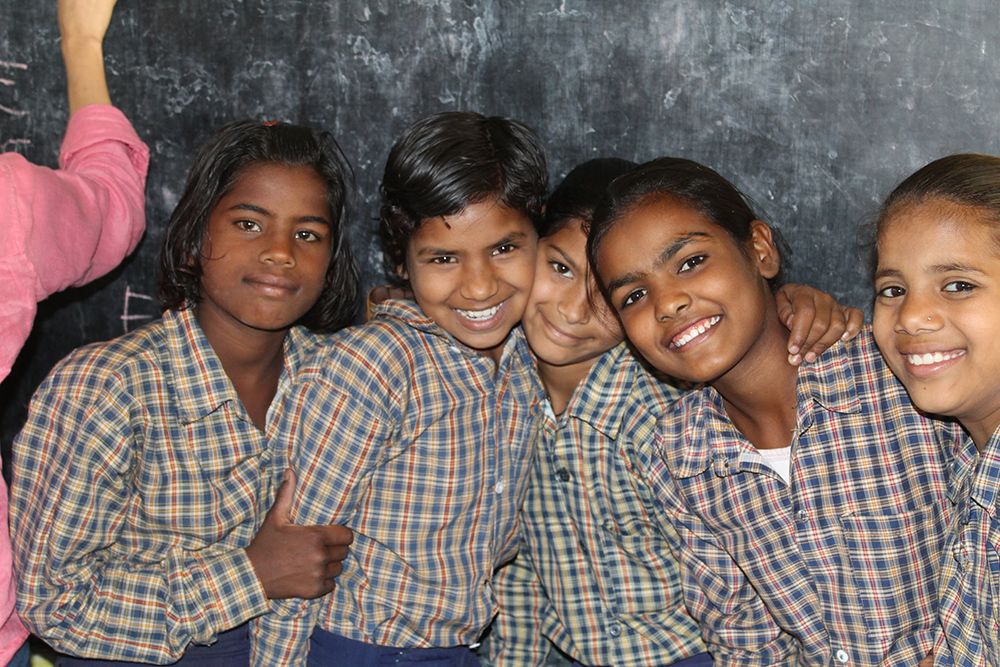 While that second year in India yielded a small supply of bags to sell—and they sold well–the students sought ways to improve the quality and durability of their products, while developing marketing materials including a story card. They wanted to provide the Bandhwari women with lessons in bookkeeping and Excel tutorials to help make the project a sustainable one.

As year three approached, Wernick was invited to give a guest lecture on corporate social responsibility to a class in the Master of Arts in Global Affairs (MAGA) program in the Steven J. Green School of International and Public Affairs. He happened to mention the IBHS social entrepreneurship project in India in passing. When he finished his lecture, a bunch of hands shot up to ask: “Can we participate too?”

Wernick replied without missing a beat: “Absolutely.” After all, he figured, “the more people we could involve, the greater the positive impact we could have.”

For a while, Wernick wondered whether he made the right decision. While including graduate students brought the project new knowledge and professional contacts, it also created some friction. Graduate students with more experience raised eyebrows among the IBHS undergrads that had initiated the project. Wernick credits Gabriele Gocso, a Green School MAGA student who also serves as a human rights coordinator for the Miami-based United States Southern Command, with helping to create a cohesive group.

As the trip drew near, all students united toward their common goal. SIPA students were funded through their school, and FIU Business and its Department of Management and International Business provided funding. The rest of the money was raised through bake sales, GoFundMe pages, car washes and other shared social and fundraising events. In the end, two dozen students — half graduates and half undergraduates — left for India on March 9, 2018.

Going to India was an eye-opener for students accustomed to first-world accommodations. Hotels lacked creature comforts and U.S.-style cleanliness. Yet spending extensive time in India gave students the opportunity to see first-hand the challenges of life there, particularly for women and children.

They volunteered in the Bandhwari classrooms and played pickup games of soccer. They worked at a shelter for children who had been abandoned and found living in the streets, visited a home for children with HIV that delivers life-saving medicine, paid a visit to an elephant shelter and spent time at a hotel with a commitment to hire people with severe physical disabilities.

The trip gave former IBHS president Daniela Rodriguez, who will graduate this fall with a degree in biology, a new perspective and a strong sense of determination to change the world.

“Where you are born is often a determining factor in so many people’s lives, and it shouldn’t be,” she said. “Traveling to India gave me a new appreciation for the things in life that we often take for granted, as well as a desire to help others improve their situation.”

Selling a product, planning for sustainability.

Since returning, the students have sold their wares at multiple sites on and off campus. They set up a sales table in the MMC Breezeway, advertised on Instagram (@IBHS_FIU), on a website and on Facebook.

Gosco noted that SIPA’s MAGA students were inspired by the opportunity to put what they were learning about international development into practice. Prior to the trip, they outlined the goals they hoped to achieve and in addition to working with the women, they started collecting metrics to evaluate.

As the project moves forward, students hope to set up an ongoing structure for the project to grow, and hope to work with other entities within FIU and beyond to make it a sustainable project.

Students agreed that Wernick’s decision to expand the group was a good move.

“It was amazing to see how close we got, and how much of an impact a group of 24 of us could make,” said Claudia Garcia, IBHS’ director of finance. “There are now 24 of us to share the Bandhwari story.”

Looking ahead, Wernick is excited about what the future holds for the Bandhwari project.

“We are approaching a tipping point,” he says. “This project has the potential to really change the lives of some very poor women in India. But it is clear that it has already changed some other lives closer to home – the lives of our students.”