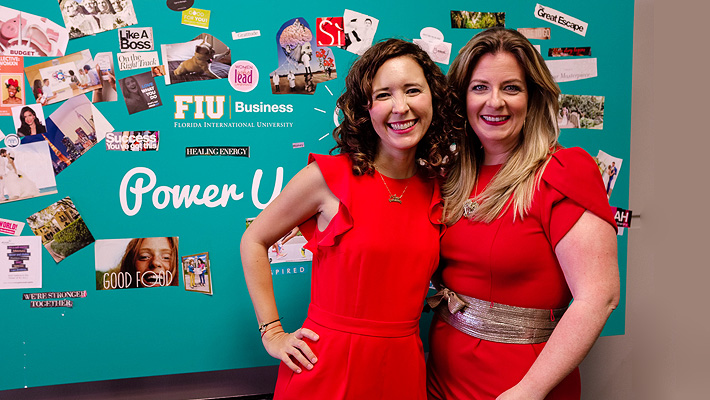 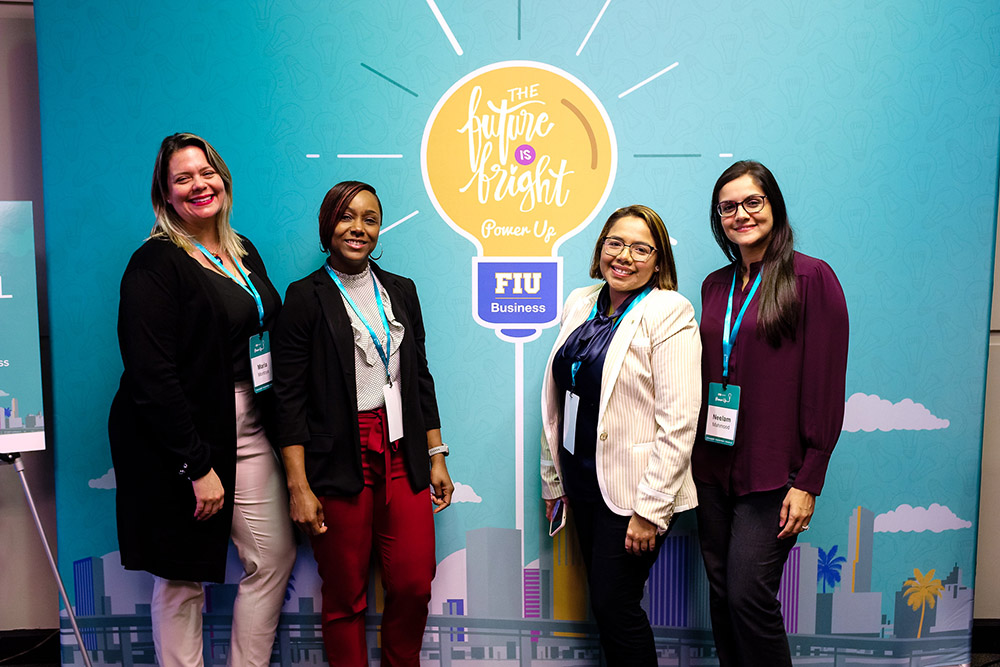 For five years, the FIU Power Up Women’s Leadership Summit has sought to empower women at every stage of their careers through expert insight and community building, making an impact on women’s lives globally and locally.

This year’s conference, held March 6, 2020, drew a crowd of over 300 to listen and learn, network and set goals. Organized by FIU Business, Power Up celebrates International Women’s Day, March 8, by creating a communal opportunity to focus on building a wide variety of skills: setting personal and professional goals, preventing burnout, building a network, and overcoming barriers to success in an uneven workplace.

In the opening session, FIU Business Dean Joanne Li welcomed participants and shared a perspective on where women were heading as leaders. She noted a Lean In study’s finding that it will take three generations to reach gender parity in management jobs.

“We represent half of the population,” she noted. “It should be an easier fix than it’s been.”

Mistress of Ceremonies and FIU Business alumna “Luly B.” Carreras emphasized that rather than just focusing on achievement, an integral part of empowerment was recognizing one’s own limitations, and honoring them.

Laura Gomez, actress, writer and director who portrayed Blanca Flores in the Netflix’ breakthrough hit series “Orange is the New Black,” ended the day-long program with honesty, humor and inspiration. Interviewed by FIU Business professor Seema Pissaris, she shared insights on surviving, thriving and overcoming obstacles as a Latina actress, far from a straight path, or a predictable one, and meeting expectations, including her own.

“Have I made it? In terms of what my aspirations are? Not exactly,” she said. “Am I on my way, yes. Am I successful? In my book, a woman surviving in the patriarchy is successful every day, just by living. In terms of my career, yes, I think I am.”

Her career never stops being a challenge, she added. “I keep redefining what success means for me.” Writing helped her “develop muscles that she wasn’t even aware of,” and got her to the roles she wanted as a Latina. Directing became a necessity too. Then it became “almost I need to create more space for this voice that I’ve discovered, that I felt others could relate to.”

“Being a woman of color is supposed to be my weakness, … but is exactly what I feel has given me the most work. I may not have gotten 100 roles, but I got the role that only I could do,” Gomez said.

At Driving Solutions for the Future, a standing-room-only panel on success strategies and techniques for getting to the next career stage, Cristina Miller, president and CEO of Intermedia Touch, shared her journey of achieving success through resilience and determination. Now in remission from breast cancer, she was able to grow her business, a Miami-based digital signage firm, as she underwent treatment.

“Focusing on the business, and not focusing on being sick, is what got me through,” she said. She advised participants to look to “things you’ve done in the past, and your support system, to overcome fear and do new things.”

For the first time, the conference included two sessions on the basics of professional wine tasting, presented by FIU’s Chaplin School of Hospitality and taught by faculty member Brian Connors, interim director of the Bacardi Center of Excellence and wine connoisseur for the school. The wine seminar also introduced attendees to the do’s and don’ts of ordering wine from a restaurant wine list.

Opportunities to network abounded at Power Up, including morning coffees, a luncheon and an evening wine reception. Other panel discussions included Speak Up, Step Forward and Stand Out offering Dale Carnegie partner Christine Ramirez’ best tips on how to start a conversation, and Press Pause, featuring psychologist Whitney Goodman’s insights into putting the brakes on burnout through managing the stress reaction.

True to its international nature, the conference helped support the women of Bandhwari, India, as part of an ongoing international service project of the college’s International Business Honor Society, whose members visit India on a service project to benefit the women and children of the village, and work with women to produce hand-sewn accessories, including purses and wallets. Members of the organization were on hand to sell the items, with proceeds going directly to benefit the village and its women and children.