Currently a student in the Master of Science in Human Resources Management (MSHRM) program in the Chapman Graduate School of Business, she plans a career in human capital consulting following her graduation in December, 2006.

“I would like to work for a company, offering human resources (HR) consulting services to their clients with respect to staffing, recruiting, and outsourcing,” said Ramkissoon, who made a switch from finance, in which she earned her undergraduate degree, into HR because she felt the field would give her more opportunities to interact directly with people.

Ramkissoon was inspired to apply for the scholarship by one of her best friends—Shradha Ramchandani (BBA ’06), last year’s William G. McGowan Scholar.

“She urged me to apply because she thought I could get it and because she said I had nothing to lose by trying,” Ramkissoon said.

Among its elements, the application process requires a 1,000-word essay about the business and broader contributions of McGowan, a noted telecommunications leader.

“I learned a lot of cool things about him,” Ramkissoon said. “He was a very interesting person, and I was most impressed because he was really interested in students, especially those who otherwise would not be able to pay for their education. He also gave lots of money to charity.”

Ramkissoon contributes to the university through her work.

In addition to the essay and to needing a solid academic record—which she fulfilled with her 3.61 GPA—applicants must demonstrate evidence of campus or community involvement, a criterion that she ably met.

Since the fall of 2005, she has served as an international student ambassador, responding to email queries from students in the Caribbean and forwarding ones she couldn’t resolve to the admissions office. Starting in her sophomore year and through her senior year, she worked as an office assistant to Rosa Jones, vice president of student affairs and undergraduate education. She currently works in the college’s Office of Online Learning, helping Toni-Anne Aiken, the office’s HR manager, with HR functions such as screening resumes and setting up interviews.

The McGowan Scholarship is the first scholarship for which she ever applied, but it is not the first she has received.

“Florida International University approached me because of my SAT scores and offered me a Merit Scholarship, which enabled me to attend the university as an in-state student for my undergraduate work,” said this native of Trinidad and Tobago. 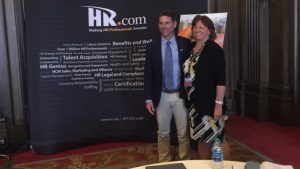