Teams competing in the Intercollegiate Case Competition hosted by the University of South Florida spent an intense 24 hours analyzing a case from an actual company and presenting recommendations to a panel of judges which included executives from the company itself—this year, Anheuser-Busch.

Weeks of preparation and dedication paid off for the College of Business Administration when its 2007 team members Blas Elias (Executive MBA student), who worked on the financial aspects; and Professional MBA program students Mahendran K. Jawaharlal, Tatiana Lopez, Martin Fernández, and Ruben Salazar, who did the marketing analysis, walked away as the winners, out-performing teams from four other Florida universities. It was the second victory for the college, whose 2003 team won the initial event.

In the college, the team received support from a cadre of faculty, staff, administrators, former team members, and a presentation coach who teaches in its graduate programs.

Judges found substance and flair in the presentation.

“The Florida International University (FIU) business school’s team made a professional presentation and left behind for the judges high-quality materials that were what you would expect from a group of consultants—not students,” said Arne G. Haak, vice president of finance and treasurer of AirTran Airways, Inc., whose company was the subject of last year’s case. “They also had lots of energy, and I was particularly impressed because they offered specific solutions, rather than generic ones.”

“To analyze a complex case in 24 hours and present to a real executive board is a rare opportunity,” said Fernández, finance manager for U.S. outbound business to Latin América in Western Unio n’s Latin Américan office. “The competition also was an excellent way to meet new people and to learn how to build a team quickly with individuals with different backgrounds. At the event itself, we got to network with colleagues from the other universities—another plus.”

Fernández worked on the strategy with Tatiana Lopez, marketing project manager, Batanga, who took on the challenge to learn how to work under pressure and who was delighted to discover that “almost everything we have done in our coursework applied to the case.”

For all the careful preparation, sometimes luck enters in.

“I had worked in the tobacco industry, which had many of the same challenges as does the beverage industry,” Lopez said. “I understood the importance of ethics and strategies for those over 21. I was confident we’d come up with a good strategy.”

That confidence was well-deserved.

“You could tell they agreed on the strategy,” Haak said. “They were able to sell the idea harder, and you could see that other teams didn’t have agreement. The FIU business team members were all on the same page and all seemed to believe they had come up with a good idea.”

Event delivers meaning beyond the victory.

Mahendran Jawaharal, senior vice president and COO at Campus Management, which provides administrative software for colleges and universities, opened and closed the presentation and prepared an abstract for the judges. For him, the chance to “understand needs in a high-pressure situation” was a valuable learning experience. He also recognized the longer-term implications of the team’s achievement.

“As students, we have to have some level of pride in our graduate program,” he said. “We all had a desire to demonstrate that our university has the right pedigree.”

The five-person team was chosen from a field of 25 strong applicants. Ellie Browner (MS ’93, BBA ’79) assistant director, Career Management Services, who coordinated the college’s effort, accompanied the students to Tampa.

In a different event, Michael Jadoo, who expects to graduate in August, 2008, with majors in finance and management information systems (MIS) and minors in economics and Asian studies, came in second in the first business plan competition held at the Success Institute for the southern region of the business fraternity Alpha Kappa Psi. He had developed the plan in a course called Asian Values in Business. Participants in the event, which took place in Atlanta, Georgia, in February, 2007, made twenty-minute presentations and then took questions for ten to twenty minutes from a panel of judges. 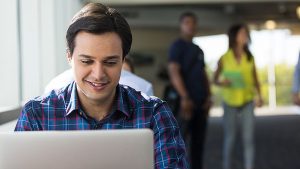