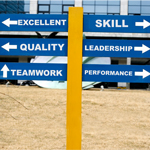 Sergey Brin and Larry Page of Google have it. Fred Smith of FedEx, Steve Jobs of Apple and Carlos Ghosn of Renault and Nissan also have it.

Vikram Pandit of Citicorp, Jeffrey Immelt of GE and Bob Nardelli, recent CEO of Chrysler and Home Depot before that, do not.

I am speaking of talent.

The 19th century German philosopher Arthur Schopenhauer said, “Talent hits a target no one else can hit.”

That may or may note be true; but one thing is for sure: it is more than innate ability. In the world of management it means brainpower and the ability to execute. And whether it is the public, private or non-profit sector, it remains a scarce commodity.

To illustrate, the Washington-based Corporate Executive Board conducted an international survey of senior HR managers. 75 percent said attracting and retaining talent was their #1 priority; and 62 percent stated their worry about company-wide talent shortages. (Migration of talent is a big issue, too. The survey found that one in three top level employees have been approached by other firms to lure them away.)

Companies are taking longer to fill jobs, and more money is being invested by firms in management and leadership training. GE and Goldman Sachs have internal universities; McKinsey has a “people committee”; and Singapore’s Ministry of Manpower has an international talent division. India’s mighty IT giant InfoSys has a training budget exceeding $100 million.

Is there a link between talent and a company’s worth in the marketplace? Data reveal that intangible assets-skilled people, patents, know-how-comprise 70 percent of the value of S&P 500 firms. That figure is higher for consultancies, investment institutions, and services firms such as those in engineering and architectural design because talent is what they are selling.

Yet the scarcity of high level managerial talent is increasing. The retirement of baby boomers means half of the top people at Fortune 500 companies will retire in the next five years. Another problem is that what schools produce and what the market needs–at both the top and bottom levels–are worlds apart. (For example, if high school shop teachers and vocational technical schools achieved their goals, there would be little need for apprenticeships and on-the-job training by unions and companies.)

Another barrier to talent attraction, retention and development is U.S. immigration policy-a mindless myriad of discriminatory and conflicting rules and regulations that keeps out much needed skilled workers. Congress has failed to lift the H-1B visa ceiling despite pleas from American technology and scientific firms who face growing shortages of technical workers. The United States simply does not produce a sufficient number of these highly skilled professionals; consequently, in science and engineering 25 percent of college-educated workers are born in other countries, as are 51 percent of doctorate holders. Not surprisingly, Canada, United Kingdom and Australia–all with more sensible immigration policies–are attracting the talent destined for the United States.

The quest for talent remains a never-ending challenge in an increasingly competitive global environment. Those nations whose governments, companies, educational institutions and non-profit organizations support the development of human capital, will triumph in the 21st century and improve the quality of life for their citizens.