After no sleep for sooo many hours, I decided to rest instead of going out to a bar opening with Monica and one of her friends from here. We originally wanted to take the tour bus around the city bright and early but we were very tired. I went out on my own to explore La Rambla and its surroundings in the daytime.

Breakfast at the hotel restaurant was delicious. They serve it buffet style with lots of conventional options as well as some traditional Spanish fare (of which I could only eat the tortilla and bolo de arroz, but no complaints there! Yum!) and a variety of fresh juice. My favorite was the peach juice. I love that the portions, the plates, and even the cutlery are very small.

I took the metro into the center of town and walked to the Plaça Catalunya where the tourist bus stop is. The line to get tickets was very short, but the line to board the buses was about 4 people wide and went around the block! I decided against the tour bus and turned to face El Corte Ingles. This is a store that I have heard about sooo much from sooo many people. I was very curious about the store, so I decided to go in and explore. WHOA. This store is like Macy’s, Home Depot, Michael’s, Bed Bath & Beyond, ikea, Barnes & Noble and Best Buy all rolled into one monstrous building…they sell EVERYTHING!!! After that I started walking down La Rambla street and felt like having a Starbucks iced tea. On the way over, I saw a sign that pointed to the Contemporary Art Museum…YES!!! I decided Starbucks could wait and went to the museum.

The exhibits were pretty good, considering I usually favor classical art. There was even a photo exhibit of La Gran Sabana in Venezuela 🙂 A few of the exhibits were dark and very creepy, and one of them was outright gory so I left it immediately. There was some interesting work from an artist named Gego. She was a German-Jewish artist who escaped to Venezuela during WWII. I saw her pieces and knew I had seen her work before without even looking at the label. Another highlight was a project named “New Babylon” by Danish artist Constant Nieuwenhuys. It is a series of very detailed drawings, plans, models, etc. for a city to be built atop the WWII ruins of Europe. It was reconfigurable by anyone and promoted creativity and the development of the Freudian ID. It was Utopia. However, the artist eventually saw the dark side of unleashing the ID and before abandoning the project he drew a red and black apocalypse depicting madness, slavery and dehumanization as consequences of uncontrolled desire set free.

After leaving the museum I decided to try calling the hotel for a third time and got an answer at about 1430. We decided to meet at the Starbucks at La Rambla. We then walked around the street and found an organic vegetarian restaurant just off La Rambla called BioCenter. We had a delicious lunch there. They had a salad bar (which included an amazing paté made of bread, tomatoes and I forget what else) and then brought us entrées (curried tofu, spinach pie, gnocchi with gorgonzola sauce) and dessert (flan and vanilla cake with chocolate frosting, which we had to take to go because we were so full). We continued to walk around and I wanted to show Monica the art museum. On the way over we found a store called “Air Shop” where they put everything into plastic pouches that can be inflated! It was very cool! 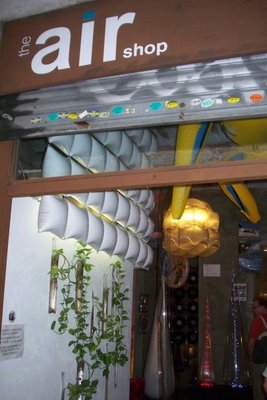 We then went to see the outside of the museum and stayed a while watching the kids who skate and perform tricks just in front of it. We also purchased tickets to an Opera and Flamenco show for that evening at the Palau de Musica Catalana. The place was spectacular. They didn’t allow photographs to be taken of the interior though 🙁 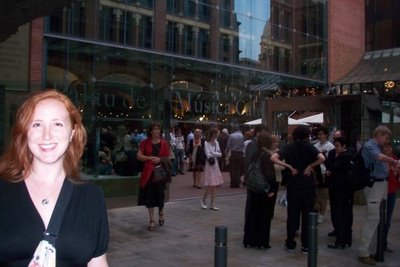 The show was absolutely fantastic, and we had second row seats which allowed us to see the dancers’ feet stomping away at a minute distance. Everything about it was great: the singing, the guitar playing, the dancing…everything! After that, we went back to the hotel for a while and then went out with Monica’s sister’s friend Diego to a place called L’Ovella Negra. 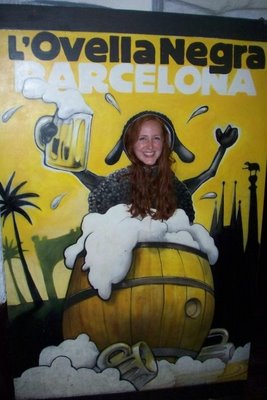 We went into a regular door on the street into a little foyer, the door was shut behind us and another opened in front to reveal a dull roar and a gigantic medieval-looking space full of people talking and drinking. We had a great time 🙂 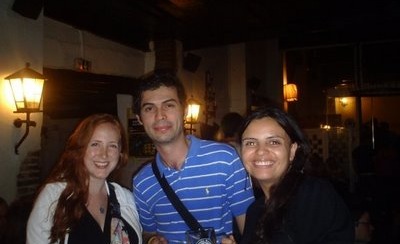 View all articles by Deborah Zinn.

View all posts by Deborah Zinn →