A chance meeting at a Florida International University (FIU) event in the spring of 2009 between Barry Shiflett, director, Career Management Services (CMS) in the College of Business Administration, and Carlo Amato, human resources director, Titan America, has led to a new relationship between the business school and the global corporation. Titan America is part of a family of companies within the Athens, Greece-based Titan Group—a 100-year-old company that is the country’s leading cement producer. Tarmac, a Titan America Business, has a plant in Fort Lauderdale, one that, along with Titan America, holds potential for graduates of the business school.

Though the relationship has just begun, Amato has joined the CMS Advisory Board, with Tomas Carmelo, general manager, Southern Region-Tarmac, a Titan America Business, serving as an alternate. Shiflett and his staff have met with Tarmac’s human resources team. And, most recently, members of the CMS staff were guests at Tarmac.

“We visited Tarmac on August 12, 2009, meeting with various individuals so we could learn more about Titan America and the opportunities they offer to business students,” Shiflett said.

Of particular interest is the company’s Management Development Candidate (MDC) program. During the course of the five-hour visit, the FIU group got a tour of the plant and were able to see all the rotational areas—such as dispatch and quality assurance—that an MDC participant goes through during his or her training in the one-year, full-time program that follows graduation.

“Tarmac will begin to formally recruit for the program at FIU in the fall,” Shiflett said, “and we look forward to continuing to build this relationship for our mutual benefit.” 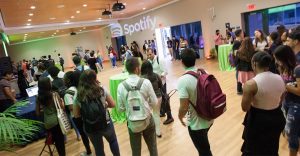