Were the embargo lifted tomorrow, U.S. manufacturers and wholesalers would not be able to ship directly to private distributors and retail stores. 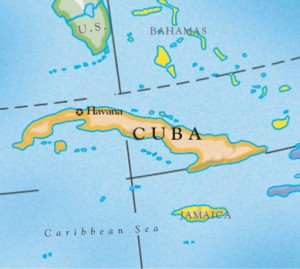 This year marks the 50th anniversary of the Cuban revolution and the 47th year since a ban on trade was instituted by the U.S. government. While the debate still rages as to whether the embargo is a prejudicial and ineffective anachronism or a noble and virtuous moral statement that will eventually produce its intended results, one thing is crystal clear—anti-embargo proponents have been steadily gaining momentum and appear to have the upper hand. The Obama Administration is searching for a plausible pretext, no matter how small, to incrementally dismantle the embargo. Lifting it entirely is one of the few foreign policy issues on which business and labor and congressional Democrats and Republicans appear to agree.

As the pro and con forces turn up the heat in their debate on the embargo issue, both sides will continue to hurl epithets and false claims and inject hypocrisy into their verbal attacks. To wit: “The embargo has failed. The Castro regime is still in power.” True. “Trade is a privilege, not a right; and the United States has chosen to make a moral statement and not trade with a non-democratic regime.” True. “But the U.S. trades with China and Vietnam, a nation that killed 55,000 Americans.” True. “While we do trade with and invest in China and Vietnam, they at least have instituted measures to liberalize, in part, their economies and respond to the wants of their consumer classes.” True.

However, the most ludicrous, naïve and empirically unproven claim in the debate, inarguably, is the assertion by anti-embargo proponents that removing trade sanctions will instigate political change in Cuba. If past embargoes by the United States on Iraq, Haiti and South Africa did not bring about democracy in those countries, neither did lifting them—there were other, stronger and more influential forces at work. Access to iPods, Levis, Motorola cellphones, Nikes, and Dell laptops will not catalyze young Cubans to take to the streets and trigger a velvet revolution. (If that were the case, Samsung MP3 players, Diesel jeans, Blackberry cellphones, Adidas running shoes, and Toshiba laptops would have sparked a democratic revolution, since countries that manufacturer these products have been trading with communist Cuba for half a century.) On the contrary, loathsome though they may find their regime, Cubans will acquiesce to their government’s policies—resentment diffused via an influx of consumer goodies. This page, right out of the PRC playbook, worked before in communist Yugoslavia under Marshal Tito and allows authoritarian regimes of the right (Chile under Pinochet), as well, to redirect political resentment towards material contentment.

Even if the embargo were lifted, what could Cubans who earn on average $10 a month (the price of one Montecristo #4 cigar) afford to buy? Given this economic reality, removing the embargo would have symbolic value but produce little else.

Not even mentioned in the debate over lifting the embargo is the control of the supply chain and distribution. Were the embargo lifted tomorrow, U.S. manufacturers and wholesalers would not be able to ship directly to distributors and retail stores owned and operated by private citizens. Uncle Pepe in Hialeah, Florida, shipping diesel compressors to his nephew Julio in Holguín, Oriente Province? Forget about it.

The entire distribution chain is in the hands of the Cuban military and intelligence services, who also control 90 percent of the nation’s exports and 60 percent of its tourism. In other words, lifting the embargo would actually postpone Cuba’s transition to democracy, as the military and security apparatus in their role as commercial “middlemen” would become more entrenched, wealthier and more tenacious in their support of the Castro brothers and the power brokers in the Cuban Communist Party.

The embargo on trade with Cuba is not iron-clad. Since 2001, Congress has authorized the sale of food and medicine to the island. Farm sales to Cuba—corn, wheat, rice, pork, chicken, condensed milk—exceed $800 million last year, making the United States the 6th largest import source, according to U.S. government data. Manufactured goods, services, energy and other food products and medicine are supplied by other countries. Venezuela’s oil subsidies and other assistance exceed $11 billion and Iran has extended a $665 million line of credit.

Any honest debate over the U.S. embargo on Cuba should decouple the political arguments from the economic and commercial ones. To link the two is disingenuous and undermines the case of both proponents and opponents of the trade embargo.