Last week’s one-day stock market plunge nearly ruined our kitchen. We are remodeling our house and planned to sell stock to cover the cost of kitchen cabinets, but when we called our broker to initiate the trade we learned our shares had dropped 20% in just a few hours! We knew something strange was happening—the stock was coming off a strong quarterly earnings report. Since we had other options, we decided to wait for the market to correct itself. 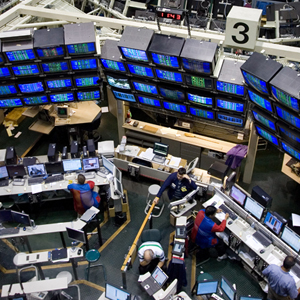 But what happened and what does it mean? While financial experts have yet to agree on the cause of the unexpected fall, the incident provides a micro-cosmic view of how paradigms shift, science advances, great companies win, and why human intuition still trumps computers.

Imagine that you are taking a jog through the woods, listening to birds, smelling pine trees and feeling the uneven surface of the dirt path below your feet. You catch sight of a particularly interesting flower high on a tree and, without slowing your pace, look up to get a better glimpse.

This momentary distraction sends you off the path and you plunge into a lake. The flower suddenly disappears as do the bird calls and the sensation of the path under your feet. You feel cold wrapped around your body and see only a murky blue around you.

Do you keep running?

Or do you start swimming?

The computer programs that automate much of the market’s trade activity plunged into the water and kept on running. They did not recognize their context had changed or, if they did, they did not know how to swim. You could say that market experienced a paradigm shift that trading programs could not adapt intelligently to.

Thomas Kuhn, the scientist who coined the term “paradigm shift” in the early 1960s, outlined the process as such:

One could say that the market fell so suddenly because computer programs were unable to move from step 3 to step 4; they could not recognize the anomalies as indications that the rules had changed; they could not adapt.

More accurately, the people who programmed the trading software only gave it instructions that worked under the old rules and when the market suddenly began behaving in an unrecognizable manner, there were no instructions for how to adapt. While humans are able step out of paradigms, we have not been successful at programming this skill into software. We can question our beliefs. Programs, for the time being, cannot question theirs.

It is this ability of switch our views of the world that allowed us to shift from a Newtonian concept of physics to Einstein’s relativistic view or that enabled us to see that our solar system rotated around the sun and not around the earth.

This is not to say that had humans been running the trades instead of computer programs we would have avoided the crisis. We may have adapted and turned the market around more quickly, but shifting paradigms is not easy. Indeed, this difficultly explains the success of many of history’s most successful military strategists and most innovative companies.

Genghis Khan, for example, conquered more land than any other man in history to a great extent because his soldiers approached warfare with a hunting paradigm. They surrounded and herded their enemies while their opponents lined up across the field. The Mongol’s opponents could not respond intelligently to their tactics because they were stuck in a different paradigm for war. Alexander the Great, Napoleon and Sun Tzu all played with paradigms to win battles.

Dell grew from a dorm room experiment into the largest PC manufacturer aided by the fact the company saw the PC business as a direct distribution and logistics challenge, rather than a technology design one. HP took over a decade to respond intelligently to Dell’s threat. Urban Outfitters, Vistaprint and Southwest Airlines all capitalized on the competitive protection that comes from shifting paradigms.

So when your opponents start automating, when they replace thinking people with people who just follow orders or replace those people with computers, there emerges an opportunity to change the rules. When everyone else sees 1-2-3, you have the opportunity to surprise them with a 4th option. Ask yourself: