Marguarette Johnson, a longtime and valued staff member of the School of Accounting in the College of Business Administration at Florida International University (FIU), passed away on April 5, 2011.

She began her career at FIU as a college work study student in 1979, and was hired in the School of Accounting as a secretary. In 1985, she was promoted to senior secretary, and she became the school’s coordinator. In 2009, she was nominated for four Employee Service and Recognition Awards at FIU:

“Marguarette was a great help and provided crucial support to the accounting program, helping professors by proctoring exams, ordering textbooks and any other tasks needed,” said Mortimer Dittenhofer, emeritus professor of accounting and one of the authors of the 600-page textbook Sawyer’s Internal Auditing: The Practice of Modern Internal Auditing and its 400-page instructor’s guide, both of which she typed.

A memorial service took place in the College of Business Complex on June 10, 2011. 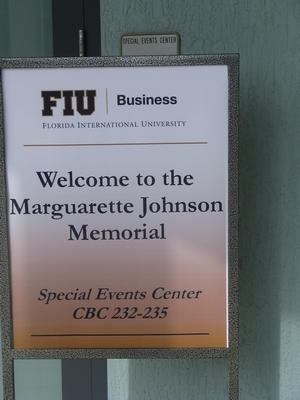 She is survived by her husband, Ulric Johnson; her sister; Elizabeth Burkins; her four brothers: Robert Burkins, Eugene Harris, Gregory Harris and David Harris; her nephews and niece, Michael, Tony, David and Natasha Harris; and her aunt, Barbara Brutchfield.